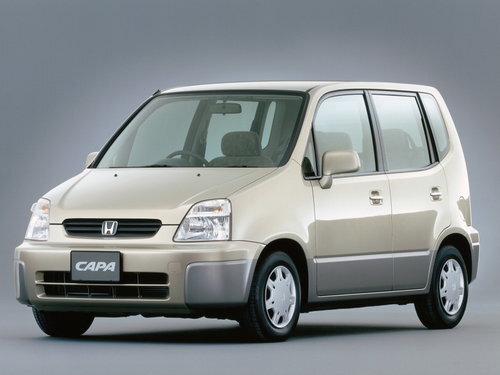 Hatchback
Honda Capa began production in 1998. Previously, the car was presented in the form of the J-MW concept developed on the Logo platform at the 1997 Tokyo Motor Show - the combination “multi-wagon” was hidden in the abbreviation. The name of the serial model comes from the word "capacity", which is translated from English as "capacity, capacity." The car combines the advantages of a station wagon and a minivan. And the Capa quadrangular body, which has a large glazing area, carries a “decisive” image. Under the “box” (BOXY) exterior design that this 5-door compact minivan, equipped with a 1.5-liter engine, has a truly voluminous interior space.
Comfort and sufficient capacity are possessed not only by the front of the Honda Capa, where the driver and front passenger seats are located, but also the rear. The rear seats are equipped with a special mechanism that has several adjustment modes, which allows you to change the position of the seats, making the car interior even more practical and convenient. The Honda Capa went on sale in April 1998. Standard equipment included air conditioning, a rear wiper, central locking, power mirrors and power windows. More expensive equipment offered a fully automatic air conditioning. The package of available options included a remote key, folding mirrors, a table built into the back of the passenger seat, a box under the seat, and adjustment of the driver's seat height. At the end of 1998, a special model “Casual style” was released, and in September 1999 the car received small external changes (new bumper), a number of trim levels were updated (three types instead of the previous two), plus all-wheel drive versions were added , the standard for all models is the tachometer. In 2000, a special tuittel series was launched based on the G configuration with improved equipment.  The power unit of the Honda Capa is a 1.5-liter 16-valve in-line “four” D15B SOHC with a timing belt drive and an injection system. Maximum power reaches 98 hp. (at 6300 rpm), and the maximum torque at a speed of 3500 reaches a value of 133 Nm. At the start of sales, the car was offered only with front-wheel drive and CVT Multimatic. It has D (Drive) mode for normal driving and S (Sports) mode for more active driving, you can quickly switch from one to another using the switch mounted on the steering wheel. This modification provides good efficiency indicators - up to 14.8-15.4 kilometers per liter in 10/15 mode (from 6.5 to 6.75 l / 100 km). Later, all-wheel drive modifications with a variator were added, as well as front-wheel drive models with a classic 4-band automatic transmission - their efficiency indicator is up to 14.6-14.8 km / l (6.75-6.85 l / 100 km).

In the design of the chassis of the Honda Capa, MacPherson strut independent front suspension and semi-independent rear (torsion beam) are used, and De Dion's rear suspension is used for all-wheel drive models. Front and rear are anti-roll bars. The brake system includes the usual scheme in this class: ventilated discs in the front and drums in the rear. One of the advantages of the car is its minimum turning radius of 4.8 m. Steering - with power steering. The wheelbase here is only 2360 mm. The compact body dimensions (3775 x 1640 x 1650 - L x W x H, mm) are combined with seemingly modest interior dimensions (1750 x 1330 x 1240 mm), however, the distance between the front and rear passengers is 930 mm, which creates a convenient area for knees and leg room. In addition, the rear seat has a longitudinal adjustment of 250 mm, adjustable folding backs that fold in parts (50:50). You can also fold the backrest of the front passenger seat - either in order to carry long luggage, or use it as a table (option). The car has numerous storage spaces and hidden compartments in the floor.

Continuing the review of the Honda Capa, it is important to note that the car is built according to the so-called "two-deck" scheme, where the upper "deck" is intended for passengers and provides large interior space and good visibility, while the lower, mechanical "deck" is responsible for the flat floor with minimal intrusion of functional parts into the interior, while providing increased safety for people sitting in the cabin. The manufacturer focuses on large headlights with several reflectors and large rear combination lights for better visibility. The car is already equipped as standard with two front airbags, anti-lock braking system, pretensioners and load limiters of the front seat belts (three-point belts are installed in the front and rear). One of the innovations with the renewal of the car in the fall of 1999 was the emergence of a braking assistance system.

Owners praise the Honda Capa for its excellent visibility, economy, comfortable and roomy interior-transformer. You can not ignore the simple and reliable suspension, excellent driving characteristics of the machine, its briskness and quite acceptable dynamics. Disadvantages are usually called difficulties with spare parts, a short trunk and the fact that the rear seats are not laid out on a flat floor. Someone strictly approaches the assessment of external design and extremely high height. The car has low ground clearance, although it is slightly offset by a short base. As a result of a partial modernization in 2000, the appearance of the front of the body changed.