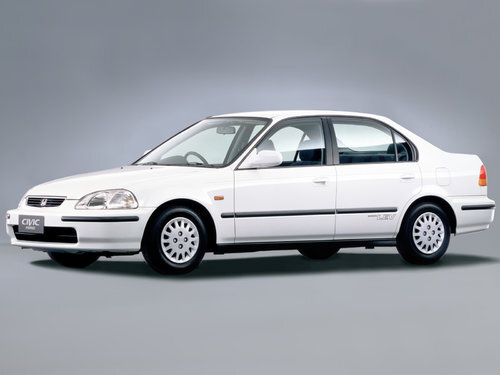 Sedan
This four-door sedan from the Honda Civic line of cars - a popular model of the 1.5-liter class - is named Civic Ferio in the domestic market. It has a body size that allows you to bring ease to the operation of the machine, and sufficient interior space. In general, we can say that in this car there are many advantages worthy of attention, including the sportiness characteristic of the Civic. A distinctive feature of this generation of the model, which became the sixth in a row in the history of Civic, is increased interior safety and fuel economy. Civic Ferio has been designed to international standards. Thanks to this, the Civic Ferio combines both power and low fuel consumption. By developing this machine, Honda has contributed to improving the environmental situation in the country. Unlike a hatchback of the same generation, for which the number of trim levels was reduced, the Civic Ferio sedan offered customers the widest possible technical variety. The greatest wealth of equipment implies the presence of an electric sunroof, of course, full power accessories, not excluding mirrors and the presence of an electric driver’s seat (in sports equipment, sports seats with improved lateral support and a sports steering wheel are used, respectively), automatic air conditioning, tinted windows, aluminum rims. The trunk, although separated from the passenger compartment, can be accessed through the rear seatbacks of the split-type.

The Honda Civic Ferio engine range starts with a 1.3-liter 91-hp engine, equipped with a manual or automatic transmission. 1.5-liter engines are found in versions with a capacity of 105 and 130 hp. and, in addition to the aforementioned transmission types, they also offer the Honda Multimatic CVT. Here, for the first time, an engine with a 3-stage VTEC system was installed, which allows controlling the engine at low, medium and high speeds. The 1.6-liter D16A engine is also represented by various modifications: for front-wheel drive cars, its power is 105 hp. (This version is characterized by a low content of harmful substances in the exhaust gases - LEV), and for all-wheel drive - 120 liters. with. Motors of this series are equipped only with automatic transmission or manual transmission. As well as the 1.6-liter DOHC + VTEC B16A engine, designed for complete Si / Si II, while in combination with the “automatic” it has a power of 170 hp, and with the “mechanics” - 155 “forces ".

The car's suspension has a double independent lever-type design, most suitable for the implementation of the Honda Civic sports character. However, not all configurations include the presence of anti-roll bars. Front is available for Vi and RTi versions. Both (front and rear) are present in the Si sports trim levels, with even a front strut added to further increase stiffness, coupled with stiffer springs and shock absorbers. It has already become the rule that all-wheel drive modifications (Real Time 4WD) were offered only with this type of body and only in combination with a 1.6-liter engine. As the model was modernized, the approach to equipment responsible for safety was changing. So, since September 1996, frontal airbags (driver and front passenger) were included in the standard equipment. The anti-lock braking system, originally present only in expensive trim levels, began to be offered for “younger” trim levels, while the option price was reduced. Among other things, the Si-equipped car could be equipped with a limited-slip differential that improves handling characteristics (only for a 5-speed manual transmission).

Honda Civic Ferio is one of the most popular right-hand drive cars. Its distinctive feature is its extremely balanced characteristics and sporting disposition inherent in all members of the Civic family. A wide range of cars of this particular generation, the availability of inexpensive and, on the contrary, top-end sports modifications makes it easy to choose a car to your liking.