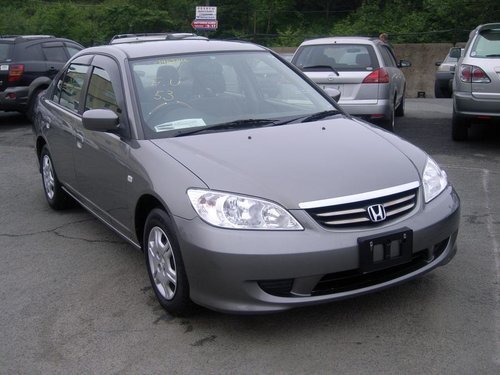 Sedan
The compact representatives of the Civic lineup, which have long been popular, have lost their position over time, as the emphasis of market priorities has shifted to models that are even smaller. So the 3-door hatchback of this generation in the domestic market was presented only by the sports modification Type R, the 5-door hatchback became more like a minivan, and the main bet was placed on the Civic Ferio sedan, which apparently has nothing to do with the above models, but demonstrates a new approach to the struggle for the buyer and offers a significantly greater variety in configuration. At the same time, while practicality is still the main characteristic for most modifications, then, for example, the RS modification, equipped with a 1.7-liter engine and a 5-speed manual transmission, boasts a sports driving mode.
As an example of the top-end configuration Ferio serves as the XL modification, where the list of standard equipment includes a leather interior with a chic beige interior and a two-tone front panel, an immobilizer with a keyless entry system, air conditioning, an AM / FM tuner with a CD player, and a windshield with UV protection strip, wood trim, sun visor with cosmetic mirror, center console with pocket and cup holders, extra pocket on the back of the front seats, fog lights, electric sunroof and smoked glass, fog and xenon headlights, navigation system with voice recognition . In addition, the Civic Ferio offers a decent supply of space for rear passengers and a flat level floor (except for all-wheel drive modifications).

To equip the Civic Ferio used a wide range of engines. The main difference from previous generations is that the 1.3-liter engine has become part of the Civic sedan's hybrid powertrain. So the “officially” engine range begins with a 1.5-liter 105 liter SOHC16 engine. with. It is aggregated with all types of transmissions offered for Civic: a 5-speed “mechanics”, a 4-speed “automatic” and a variator, and in the first two cases it is also offered four-wheel drive. The next D15B motor in the line also has a volume of 1.5 liters and a type of SOHC VTEC (115 hp), and in conjunction with it is offered a “mechanic” or “automatic” and four-wheel drive. The most powerful engine - D17A (SOHC VTEC) - develops 130 “forces” at 6300 rpm and 155 Nm of torque (at 4800 rpm). He, like the base motor, is offered with three types of transmission, and in the all-wheel drive version - only with automatic transmission.

The front suspension of the Civic Ferio now has a rack-mount design (MacPherson type), the rear suspension remains unchanged - a double wishbone. The front brakes are of the disc type, the rear ones are drum, with the exception of the XL and RS trim levels, where the rear discs are also used; and in addition, in some trim levels - anti-roll bars front and rear. The ground clearance of the Civic Ferio is acceptable 150-155 mm, and the minimum turning radius is 5.3 m. The use of electric power steering is accepted, in particular, as the main measure of the fight for fuel economy, which has always been a priority for Honda.

Airbags for the driver and front passenger (side - optional) are included in the standard list of Civic Ferio safety equipment. Among other things, the car has a body of increased rigidity, which includes elements of the frame with a high absorption of impact energy. As standard equipment there are also: ABS with an integrated brake force distribution system, child restraints, seat belts with load limiters and pretensioners. A high level of protection is shown by the results of crash tests. The Civic Ferio sedan is one of the most popular right-hand drive models on the market. The car’s assets include a good power-to-weight ratio, always characteristic of the Honda representatives of the model range, as well as a high level of economy. At the same time, Ferio, with its comfort level in the maximum configurations, can well compete with more prestigious representatives of the car market.