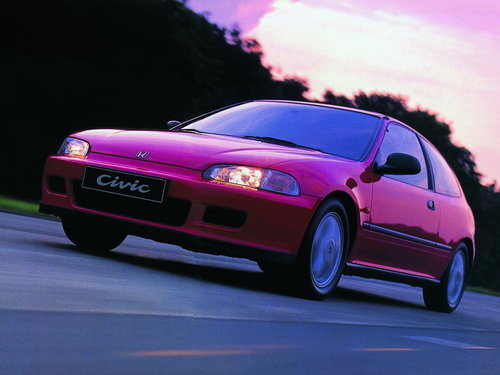 Sedan
Hatchback
Coupe
The fifth generation Honda Civic, which began in 1991, has become even more popular than the previous one. The smooth, smooth body shape, which “floats” downward, has become characteristic of this car, which has a pronounced sportiness, impeccability and perfection. In addition to improved aerodynamics, the new Civic sedan has grown a little in size, received an increased wheelbase (2620 mm). This car was developed, mainly for young people, who were destined for many new ideas laid down in the design. In addition, thanks to engines with the VTEC system, the Civic is firmly associated with a sports car with low fuel consumption at the same time. The simplest version of the Honda Civic sedan had a basic set of equipment, including halogen headlights, a radio, power steering; with an additional package installed air conditioning, cassette with AM / FM radio and 4 speakers, hubcaps on wheels, center armrest and power mirrors. More fully equipped were available power windows, an audio system with 6 speakers, a dashboard with a tachometer, luggage compartment lighting, fabric trim. In the top version it was possible to get 14 or 15 inch alloy wheels, cruise control, an electric sunroof, climate control system and much more.

The Civic sedan was offered with 1.5 and 1.6 liter engines in various power options. The most productive was the VTi model - with a 1,600-cc DOHC engine producing 160 hp. Two camshafts and a VTEC system allowed the engine to spin up to almost 8,000 rpm, and in specific power (100 “horses” per liter) Civic exceeded many of its rivals, while the developers dispensed with the use of turbocharging. From zero to 100 km / h, the sedan accelerated in 7.8 seconds. Optimal in all respects was considered a modification of the ESi with a 125-horsepower 1.6-liter 16-valve SOHC. This engine with a VTEC system on the intake valves gave the sedan a completely lively character - 8.8 seconds to “hundreds”. The more modest versions of the LSi cost a 90-horsepower 1.5 SOHC. Depending on the modification, the Civic was equipped with a 5-speed manual gearbox or a 4-band “automatic”. The fifth-generation Honda Civic was “sharpened" precisely under the sporty character of driving. Being a front-wheel drive car, it has a completely independent suspension of all wheels on double wishbones and is characterized by excellent grip. Modified components of the powerful VTi version (in particular, modified springs and shock absorbers, anti-roll bars) support the necessary driving qualities and handling at high speeds, albeit by increasing stiffness. Sedan body dimensions: 4405 x 1695 x 1375 mm (L x W x H). The ride height is 155 mm. In the fifth generation, the wheelbase of the sedan reached 2620 mm, making it more spacious inside. The trunk has a volume of 380 liters. The rear seats fold in parts (60:40).

The main decision when creating this generation Honda Civic was the emergence of a set of safety options, which included two airbags (for the driver and front passenger) and an anti-lock braking system - these systems, as a rule, were part of the standard equipment of the upper trim levels. Since 1994, two pillows have become the standard for all versions, and the ABS system continues to be installed as an option.

Among the advantages of Civic, the main ones are high driving performance, dynamics and, at the same time, also economy. Especially, of course, the performance of motors deserves respect when it comes to VTEC engines. The car seats are quite comfortable, enough space for five passengers. In addition to the sedan in this generation, the car was produced in coupe and hatchback bodies (3- and 5-door). The disadvantages of the model include poor corrosion resistance, poor sound insulation, low clearance.
The fifth generation Honda Civic, which began in 1991, has become even more popular than the previous one. The smooth, smooth body shape, which “floats” downward, has become characteristic of this car, which has a pronounced sportiness, impeccability and perfection. When developing this car, intended mainly for young people, many new ideas were realized. The salon is equipped with seats made of bright materials. One of the features of the three-door Civic is the unusual design of the trunk lid, which consists of two parts that can be opened separately. Since the launch of the fifth generation, the Honda Civic began to be associated with a sports car with low fuel consumption at the same time.
To minimize the cost, the basic versions of the Civic V even offered power steering and air conditioning as an option. The more expensive versions were equipped with automatic air conditioning, a steering column with steering wheel angle adjustment (of course, with a hydraulic booster), electric windows and mirrors, a rear spoiler with an additional brake light, and aluminum rims. Elite modification SiR II offered a darkened transparent sunroof, sports steering wheel, tinted windows. The car is perfectly adapted to create a two-seater space with the rear seats folded, forming a trunk with a flat platform. It can be noted comfortable seats with low seating, ample rear space. At the same time, the Civic has proven itself as a convenient car for business trips around the city. In May 1995, the fifth-generation fifth-generation Honda Civic came off the assembly line.

The range of fifth-generation engines Honda Civic still starts with a 1.3-liter engine, whose power has grown from 82 to 85 liters. with. One and a half liter engines (several modifications were offered) also added to the power - depending on the model, it is now 91-130 hp. The top-end B16A engine was not ignored. This 1.6-liter inline 4-cylinder DOHC i-VTEC engine has a maximum power of 170 hp. If in the previous generation in the Civic SiR trim levels it was equipped exclusively with "mechanics", now it has also received an "automatic", however, in the case of an automatic transmission, the power is lower - 155 liters. with.

With independent multi-link suspension on all four wheels and extraordinary ease of handling, the Civic is fully consistent with the image of a front-wheel drive sports car. The next-generation Honda Civic's wheelbase has increased by 70 mm (up to 2570 mm). From this, even slightly, the minimum turning radius has grown. But the mass of the car has changed significantly - the lightest version with a 1.3 engine has become more than 100 kg heavier than the previous generation car. However, this was partially offset by the increased power of the motors. Also increased ground clearance - from 150 to 160 mm.

The new generation also marked a new approach to security. If in Civic IV the front brakes with a cast disc were installed on the simplest basic modifications, now they are replaced by ventilated discs, which has become the standard for all versions. On expensive versions, airbags appeared, however, only frontal ones (driver and front passenger). As an option, a three-channel anti-lock brake system was offered, and for sports modifications SiR, in addition, an anti-slip system, as well as a limited slip differential LSD.

The fifth Civic still does not lose its popularity. A significant part of the copies imported back in the time of active development of the right-hand drive segment can still offer good technical condition. And due to its sportiness and low prices for this generation, the car has become very popular among tuning enthusiasts, especially the “charged” versions.
The Civic model has always been presented as a compact hatchback with an engine capacity of up to 1.5 liters. But to everything else, there was also a two-door modification. It was developed for sale in the North American market, where the demand for such models was very high. In 1991, the fifth generation of the car appeared, created on the basis of the Civic Ferio sedan. This series was distinguished by the colors of the body color, which gave the car a chic look. Despite the size, trim and capacity of the rear seats were at a high level. This car was successfully sold not only in North America, but in Europe and Japan. Thanks to the stylish appearance and aerodynamic shape of the body, the car has become very popular among tuners and racers, mostly young people.
The coupe did not provide for a wide variety of trim levels. After all, this is already a special modification, and even for people with high demands. So the equipment was provided to the maximum: full power accessories, automatic air conditioning, a sunroof, rear wiper, improved trim, right up to installing an expensive speaker system and a chic radio, to which a retractable antenna relied. Tires dimension 185 / 60R14 on alloy wheels. In general, the car was planned for the role of an inexpensive and relatively simple sports coupe for the general public and coped with this task perfectly, serving as the primary basis for the further development of this modification in the next generations.

As the power unit for the coupe, the only 1.6-liter D16A (SOHC16) engine was used, equipped with a VTEC variable valve timing system and developing a maximum power of 130 liters. with. at 6600 rpm and a torque of 145 Nm at 5200 rpm. In terms of specific power, at which horsepower accounts for about 8 kilograms of its own weight, the Civic Coupe, of course, cannot compete with the SiR modifications of the hatchback and sedan, but still this figure is very good, so the car can please the owner with good accelerating dynamics , and in addition, low fuel consumption - 6.4 liters per 100 km. Originally offered for sale, the model was equipped only with an automatic 4-speed gearbox, and since 1994, an option for a 5-speed manual has been added. Thanks to its independent double wishbone suspension, both front and rear, the Civic Coupe has earned the fame of a great front-wheel drive car with easy handling and sporty driving behavior.

As a protection measure for the driver and passengers, the Honda Civic Coupe offers a driver's airbag, three-point belts, and door stiffeners. The front brakes are ventilated discs, but the rear ones, like most low-end Civic versions, are drum-type. However, despite this, the car has good braking dynamics: with an initial speed of 50 km / h, the braking distance is 15.5 meters. In the plus of the two-door body - the best rigidity.

The Civic coupe is of interest not only as a car for individual use - after all, it’s a pretty decent trunk here, and you can’t call the cabin too cramped. However, the specificity of the modification cannot be denied, and this affects the fact that the coupe significantly loses sedans and hatchbacks to the amount of offer.