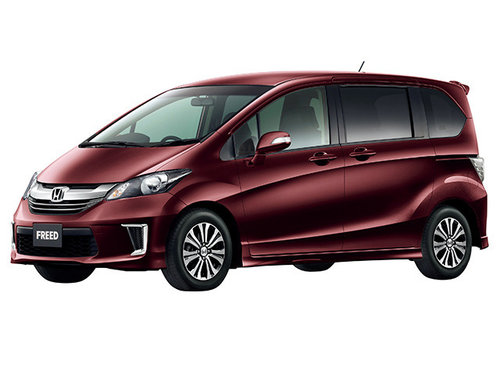 Accessories
Van
In April 2014, sales of the updated Honda Freed and Honda Freed Spike models started in Japan. Restyling - cosmetic. The most important innovation on which Honda pays the most attention is the installation of glasses with a high level of UV protection (99%). Another innovation is an air conditioner with plasmacuster technology developed by Sharp. Now the air in the salons of all versions except the base one will be much cleaner. The third tier is changes in design and minor interior alterations: a new radiator grill and front bumper, hybrid models in the rear lights have transparent brake light sections turned red, a new body color appears dark red mother of pearl (Premium Deep Rosso Pearl), and in the cabin added a new color scheme "cinnamon" (Bright Cinnamon). In the cabin model Honda Freed can be 6 or 7 seats. The 2014-2016 Honda Freed has two engine options: a regular gasoline 1.5-liter i-VTEC or a hybrid powerplant.
2014 Honda Freed trim levels include familiar versions. For models with a gasoline engine, this is the standard “G”, more saturated “G Just selection” and the top-end “G aero”. For the Freed Hybrid, there are two trim levels: basic and Just selection. Outwardly, the hybrid version of the Freed from the gasoline differs in small details (like a different design of headlights and a false radiator grille, etc.), which give it a more stylish look. If we talk about the volume and organization of space, the Freed Hybrid is no worse than its usual brother. The low and flat floor forced the designers to design special mounts for the seats, so that the battery does not interfere with landing and does not reduce the number of seats. And with a hybrid installation, Freed can be either six- or seven-seater. In 2015, the special edition “Premium Edition” was released. The upholstery is a combination of soft fabric and suede in black. High-quality fabric trim is also present on door cards. Leather trimmed steering wheel and transmission control knob. Coasters in the front panel - with LED backlight. Standard equipment also includes an electric drive for both sliding doors and cruise control.

The technical equipment of the Honda Freed 2014-2016 is the same. The base engine is a 1.5-liter i-VTEC, which transmits torque either to the front axle via a variator or to all four wheels through a 5-speed automatic transmission. The hybrid version of the minivan consists of a one and a half liter engine strangled up to 88 liters. with., a variator, a 10-kilowatt electric motor and a lithium-ion battery. In fact, the same setup that was used on the Fit second generation. The drive is carried out on front wheels through a variator. The fuel consumption of the hybrid version is 4.63 l / 100 km, which allows the car to run on one liter of fuel up to 21.6 km (in accordance with the method of accounting for fuel consumption JC08). The Econ mode and the Eco Assist system, which helps the driver maintain an environmentally friendly driving style, should help achieve this result. Honda Freed with a conventional gasoline engine consume about 5.3 and 5.7 l / 100 km (19 or 17.6 km / l) depending on the transmission. The fuel tank of Honda Freed has a volume of 42 liters.

The compact minivan Honda Freed is designed based on the Honda Fit. The front suspension of the car is independent (suspension strut type MacPherson strut), rear - semi-dependent (torsion beam) in front-wheel drive cars and dependent (type De Dion) in all-wheel drive. The car is equipped with electric power steering, ventilated disc brakes on the front axle and drum brakes on the rear. The length of the minivan is 4215 mm, and the height is 1715 mm. Body width - 1695 mm. Wheelbase - 2740 mm, a small minimum turning radius (only 5.2 m) is an indicator of good maneuverability. The dimensions of the Honda Freed are 2625 x 1440 x 1265 mm. In running order with three rows of seats, the luggage compartment of the Honda Freed is quite small, but good transformation capabilities allow you to adapt the interior space even for carrying long luggage.  A set of safety systems Honda Freed 2014-2016 provides two front airbags and additional side airbags and curtain airbags. As well as fastenings for child seats, active head restraints, anti-lock braking system (ABS) and auxiliary braking system (BAS), stability control and traction control, including the function of assistance when starting on the rise in all models. The car received the highest rating in crash tests JNCAP (2008).

Honda Freed 2014-2016 deserves the most positive ratings for external and internal design, roominess, comfort (especially in six-seat versions), efficiency. The engine, despite its modest size, is quite powerful. Of great interest is the hybrid version with a compact, lightweight and inexpensive proprietary hybrid IMA system. Of the shortcomings, the owners most often call the lack of the ability to get a flat floor from the folded seats, low ground clearance, lack of a spare wheel.