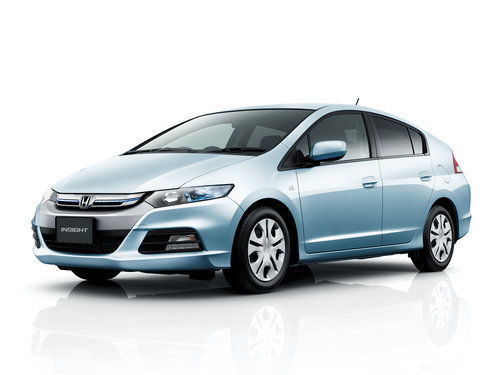 Accessories
Hatchback
The updated hybrid hatchback Honda Insight the company released in October 2011. The car has a new front bumper, which is distinguished by more “sharp” forms, the design of the fog lamps and the radiator grille has changed, the head optics have been updated; modified rear of the car, increased tire size. In addition, improved soundproofing of the cabin. Mechanical changes include the refinement of the 1.3-liter engine and transmission in order to reduce friction and increase efficiency, although the power remains the same - 88 liters. with. However, a new, more powerful modification appeared with an engine of 1.5 liters (115 hp), which was called Exclusive.
Changes inside the Honda Insight include a new dashboard and a redesigned center armrest between the front seats, oversized cup holders, and more refined interior trim. The shape of the pillow has been changed at the rear sofa - now it’s more comfortable for tall people from behind, they have additional space for knees and above their heads. Updated a number of trim levels. Models with a 1.3-liter engine are available in two versions: G and L. Exclusive models with a 1.5-liter engine include three options: XG, XL and the top-end XL InterNavi Select with a 7-inch high-definition digital monitor, DVD / CD and AM / FM tuner, AV input, steering wheel control buttons, voice recognition and Bluetooth hands-free features, as well as data transfer using 3G networks. It is worth noting the external differences of the Exclusive versions - they differ in blue headlights, a grille with built-in LED lights and a more aggressive bumper.

The power unit of the Honda Insight 2011-2014 includes two variants of hybrid systems. The basic system remains a modernized system with a 1.3-liter i-VTEC engine with 88 hp, which now provides mileage of up to 27.2 kilometers per liter of gasoline in JC08 mode or up to 31 km according to the 10/15 standard (the previous figure was 30 km / l). The new hybrid modification in Insight Exclusive models has a 1.5-liter 115-horsepower engine combined with the IMA hybrid system. With a new power plant, the car significantly improved its dynamic characteristics, while the efficiency indicators are 23.2 km / l in JC08 mode and 26.5 km / l in 10-15 mode. For Exclusive models, the steering wheel shift paddles are standard equipment for a 7-speed CVT operation for the pleasure of driving in manual mode. The Honda Insight is built on the basis of the 2nd generation Jazz / Fit, has an independent front suspension (MacPherson strut) and a semi-independent rear. Steering gear-rack - with an electric amplifier. In order to meet the “Honda” standard of behavior on the road, the car has a lower center of gravity and optimal weight distribution - this is facilitated by the battery pack and power control unit located behind the rear seats in the trunk floor. After restyling, the hatchback has optimized suspension and steering settings - improved handling and stability of the car. In addition, the width of the tire tread increased from 175 to 185. The dimensions of the updated hatchback did not change: length 4390 mm, width and height 1695 and 1425 mm. Wheelbase is measured 2550 mm. Interior dimensions: 1935 x 1430 x 1150 (L x W x H). The hatchback trunk has a volume of 400 liters, if you use an additional niche in the floor with a depth of 105 mm. The rear seats fold into a flat floor, the resulting compartment is 1410 mm in length. Inside, there are many trays, pockets, cup holders, etc.

After restyling, the Honda Insight of the second generation was standardly equipped with the VSA (Vehicle Stability Program). Together with the already noted changes in the characteristics of the suspension and steering, this significantly increased the safety of the hatchback. The equipment list includes: front airbags, optional side airbags and curtains for the entire length of the passenger compartment, cruise control and other systems.

Honda Insight did not become a full-fledged competitor to the Toyota Prius - a simpler hybrid system, higher consumption, less comfort. But the car turned out to be quite dynamic, unpretentious, owners like its driving performance, roomy trunk. Models after restyling are interesting not only for general improvements in appearance and interior, but also because the manufacturer offers two versions of the hybrid model at once: a more economical and a more powerful one. Disadvantages: cramped rear, low clearance, stiffer suspension; spare tire and no place for it.