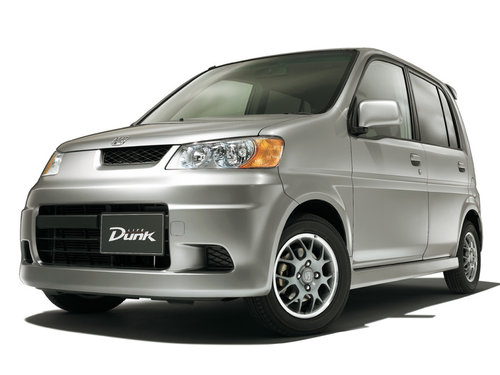 Accessories
Hatchback
At the end of 2000, a turbocharged version, Life Dunk, was added to the Honda Life lineup. It differs not only by the name, but also by the design of the front optics (each headlight is two-lamp), as well as a huge bumper, a pronounced side kit and a massive rear spoiler plus a large red reflective lamp on the tailgate, which ennobled the stern of the car, which looks pretty rustic at the base Life. Among other things, this version has enhanced brakes and suspension. The Life Dunk is driven by a three-cylinder OHC unit with a turbocharger - its power is 64 hp.
Honda Life Dunk, which went on sale in December 2000, received an upgraded interior with an updated center console and climate control unit, more convenient and comfortable seats. The interior is dominated by black, and part of the trim of the seats and door panels is made of silver. The car has a sports three-spoke steering wheel. The basic equipment of the TS includes power accessories, a rear wiper, optional alloy wheels and a rear spoiler. Options TR will offer climate control, a leather steering wheel, and alloy wheels and a rear spoiler are already available as standard. In November 2001, the TS Special and TR Special versions were added with an improved exterior-interior. In August 2002, the Diva version was released, which took an intermediate position between TS and TR, differing in some refinements and the most optimal composition of equipment.

Compared to the basic Life model, the Life Dunk turbo version looks much more attractive due to the increased engine power. Combined with turbocharging, the E07Z delivers 64 hp. instead of 50, and the torque reaches a value of 93 Nm, which is 32 Nm more than the aspirated. Even taking into account the fact that Life Dunk is a bit heavier, it still wins significantly in dynamics - after all, for each “horse” under the hood there is almost 2.5 kilograms less weight, which in general gives a significant gain. Life Dunk was equipped with an exclusively automatic transmission (3-band automatic), consuming 5.9 liters of gasoline per 100 km in front-wheel drive modification and 6.2 l / 100 km in all-wheel drive.  At Honda Life Dunk, the suspension differs depending on the type of drive. All versions have independent front suspension (MacPherson), rear - semi-dependent torsion bar for front-wheel drive or dependent De Dion for all-wheel drive cars. Combined brake system - front disc brakes larger than usual Life, rear drum brakes. The standard wheel size for this more sporty version of the Honda Life is 155 / 65R13. With a wheelbase of 2360 mm and a gauge width of 1305/1295 (front and rear), the turning radius is 4.5 m. The dimensions of the machine itself do not differ from the base Life - these are the same 3395 mm in length, 1475 and 1605 mm in width and height. Interior dimensions: 1660 x 1210 x 1255 (L x W x H). As for the amenities for transporting things, then this Honda Life Dunk is no different from Honda Life. By transforming the back row, you can get a more spacious and wide space with a flat floor. Thanks to Honda technology, there are no omissions and deficiencies in the car's security system. The front seats are equipped with SRS airbags; the body structure is designed in such a way that in case of an accident the impact is mitigated; interior equipment provides increased head protection in a collision. Perhaps the main difference from the Honda Life was that Life Dunk was standardly equipped with an anti-lock brake system, as well as electronic brake force distribution and emergency braking systems. As a compact city car, the Honda Life Dunk has many attractive sides. Economical, tall, roomy. It is not bad in cross-country ability; it does not take up much parking space. Unlike the basic Life, with a greater guarantee it does not save when overtaking. The downsides of the owners are called sailing, stiffer suspension, poor corrosion resistance, expensive parts.