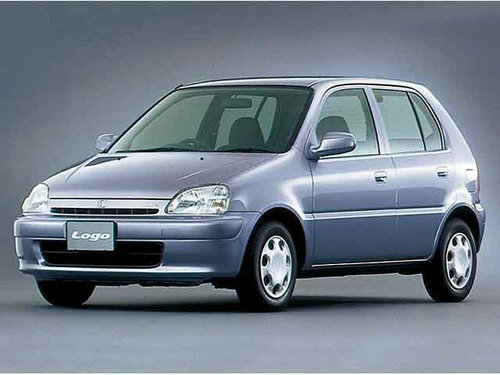 Hatchback
In the early years of production, the front of the Logo body had no grille. The advent of the mini grille completely changed the impression of the car. Restyling, carried out in 1998, also includes new more rounded headlights, wheels of a different design. The car body is reinforced to meet the new standards of safety in collisions, although this was reflected in the increase in mass. An important innovation was the addition of a sports equipment model 1 to the modification range. 3 TS with 16-valve SOHC engine. In addition, the all-wheel drive Logo appeared in the lineup in combination with the usual 8-valve engine and an economical variator.
Changes to the Honda Logo 1999 model year partially affected the interior. It may be noted the appearance of new upholstery options, the driver’s seat now has two “lamb” responsible for adjusting the seat cushion, in the top-end configuration L in the five-door hatchback, the rear seat can be folded in parts (50:50). For Logo 5dr, two trim levels are offered: standard G and luxury L. The new TS model takes a special line. Lining on the bumpers and sills, a spoiler on the tailgate, original 14-inch aluminum wheels set the sporty look, all four electric windows are installed in the cabin, folding and adjustable electric mirrors, a leather-wrapped three-spoke steering wheel with transmission control buttons (you can set the sports mode), a combination instruments with a tachometer. In September 1999, a special Sportic edition was released on the basis of TS - this version was distinguished by improved interior and exterior details, plus an exclusive Super Sonic Blue Pearl exterior color.

The design of the Honda Logo suspension in front-wheel drive versions is simple. Front MacPherson strut, semi-independent torsion beam at the rear. At Logo TS, the suspension is underestimated by 10 mm and is tuned for more active driving, anti-roll bars are installed at the front and rear, instead of standard tires 155 / 80R13, tires with an increased speed and load index, dimension 175 / 65R14 are used. In all-wheel drive models, the rear suspension is dependent (De Dion) and is supplemented by a rear stabilizer. The turning radius of the hatchback is 4.6-4.8 meters. The wheelbase has a size of 2360 mm. The ride height is 155 mm. Body dimensions after restyling: length 3780 mm (+30 mm), width 1645 mm, height 1490-1545 mm. As for the dimensions of the cabin, it is 1705 x 1330 x 1205 mm (L x W x H). Logo rear seat folds down to increase boot volume from 230 to 750 liters.

In the basic configuration of Honda Logo 1998-2000, two front airbags (driver and passenger) and an anti-lock brake system became the standard. Additionally increased body rigidity. Seat belts with pretensioners and load limiters are installed on the front, three-point belts are located on the rear side seats (central belt).

With all its objective disadvantages (cramped interior, simple design, lack of sound insulation), the Honda Logo is a worthy representative of its class. In addition, with good equipment, these used cars are considered one of the most affordable. Due to its simplicity, the D13B engine is highly reliable. Perhaps one of the main drawbacks is that the body quickly rusts. There is enough maneuverability for the city in abundance, but it is worth considering that in the behavior on the road the Logo is not distinguished by a “Honda” balance.