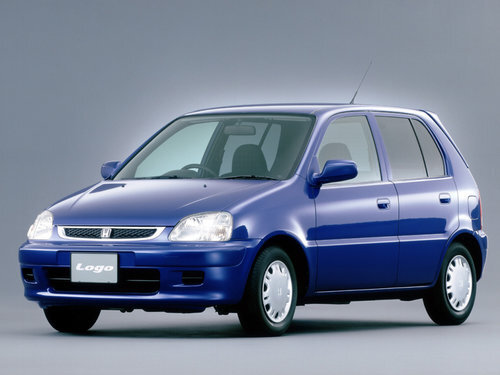 Hatchback
In 2000, Honda designers were already working hard on the project of the future car, which was to replace the Logo hatchback on the conveyor, and for the next decades to become one of the main hits of the company - of course, we are talking about the Fit model. However, the outgoing Logo was not disregarded and made additional improvements in order to foster buyers' interest. One of these was the appearance of the new Sportic sports equipment in a modification with the base 66-horsepower 1.3-liter SOHC 8. The hatchback has again changed the radiator grille, once again improved safety performance in a collision. The previous TS version, equipped with the 91-horsepower SOHC 16 unit, has also been improved and is called the Sportic TS.
The changes didn’t end there, and in November 2000 a special version of the Logo “Topics” appeared, based on the standard “G” five-door hatchback and received equipment such as remote-controlled door locks, electrically folding mirrors with body-colored housings, etc. At the same time, a favorable price was set for the car. Luxury for the five-door Logo was still L equipment, it could optionally be equipped with a climate control system and navigation. The front-wheel drive specification with the base engine and CVT, which was previously available in the G and L trim levels, after the second restyling was now offered exclusively in the Sportic version. Oddly enough, such a sporty version of the hatchback was not available for cars with a manual transmission.  The usual modifications to the five-door Honda Logo from 2000-2001 are equipped with a 1.3-liter inline 4-cylinder engine, developing a maximum power of 66 hp. (at 5000 rpm) and a torque of 111 Nm (at 2500 rpm). It is noted that 90% of the torque falls at 1300 rpm. Thanks to this, the engine pulls perfectly from the bottom, giving Logo sufficient acceleration dynamics for urban conditions, while it is noted that the hatchback is noticeably heavier by the end of production - due to the modernization of the body (safety requirements), the weight difference between early and late models is almost up to 100 kg As before, the hatchback was offered three transmission options: a 5-speed manual transmission, a 3-band automatic transmission and a Honda Multimatic CVT. With the CVT Logo can be all-wheel drive (Real Time 4WD system), but the mass of these cars reaches 1040 kg, so you can’t expect much agility. Logo Sportic TS models are equipped with a 91-horsepower 16-valve engine. (at 6300 rpm) and a torque of 114 Nm (at 4800 rpm). Depending on the modification, fuel consumption is 5.3-6.5 l / 100 km in 10/15 mode and 3.6-4.7 l / 100 km in 60 km / h mode. The volume of the fuel tank is 40 liters.

The design of the Honda Logo suspension in front-wheel drive versions is simple. Front MacPherson strut, semi-independent torsion beam at the rear. At Logo Sportic TS, the suspension is underestimated by 10 mm and is tuned for more active driving, anti-roll bars are installed at the front and rear, instead of standard tires 155 / 80R13, tires with an increased speed and load index, dimension 175 / 65R14 are used. In all-wheel drive models, the rear suspension is dependent (De Dion) and is supplemented by a rear stabilizer. The turning radius of the hatchback is 4.6-4.8 meters. The wheelbase has a size of 2360 mm. The ride height is 155 mm. After the second restyling, Logo again slightly extended - for cars from 2000-2001, the body length is 3785 mm (+ another 5 mm), width 1645 mm, height 1490-1545 mm. As for the dimensions of the cabin, it is 1705 x 1330 x 1205 mm (L x W x H). Logo rear seat folds down to increase boot volume from 230 to 750 liters. In the L configuration, the five-door hatchback has a rear seat back that folds in parts (50:50), this feature appeared back in November 1998.

In the basic configuration Honda Logo 2000-2001, two front airbags (driver and passenger) and an anti-lock braking system are standardly installed. Seat belts with pretensioners and load limiters are installed on the front, three-point belts are located on the rear side seats (central belt). The bodywork Logo of the later release is considered better prepared in terms of collision safety.

With all its objective disadvantages (cramped interior, simple design, lack of sound insulation), the Honda Logo is a worthy representative of its class. In addition, with good equipment, these used cars are considered one of the most affordable. Due to its simplicity, the D13B engine is highly reliable. Perhaps one of the main drawbacks is that the body quickly rusts. There is enough maneuverability for the city in abundance, but it is worth considering that in the behavior on the road the Logo is not distinguished by a “Honda” balance.