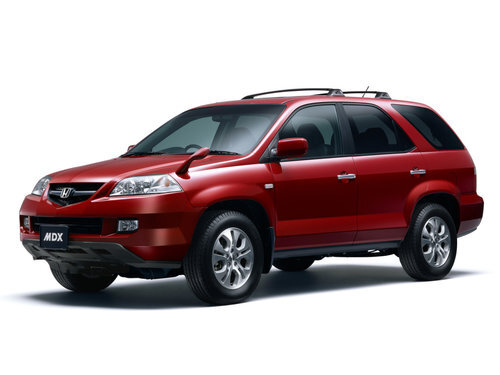 SUV
MDX has the largest body size among Honda SUVs. The interior of this car, in which 7 seats are located, was developed with an orientation to the American market. It is very comfortable, the internal equipment corresponds to the highest class. I especially want to note the second row seats. Between them and the front seats there is a fairly large space. In addition, the seats of the second and third row are easy to fold, forming a very large luggage compartment. In the exterior of the MDX there is a certain mixture of sportiness and luxury, typical of Honda SUVs. Although the original design of the front of the body thanks to the large cab makes this car something like a rhino.
The MDX has a VTM-4 + VSA driving force monitoring system. The meaning of her work is to distribute traction between the rear and front wheels, depending on traffic conditions. Equipped with MDX's new 3.5-liter V-shaped 6-cylinder VTEC engine and 5-speed automatic transmission. For its class (SUVs weighing over 2 tons), this model has a fairly low fuel consumption.

There is an elite modification Exclusive, the interior of which has a rich design: leather seats, a dashboard trimmed in wood. It is worth noting that MDX is produced by the Canadian division of Honda and has been imported to Japan since 2003.