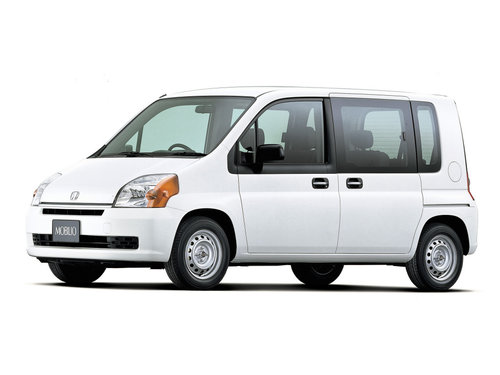 Accessories
Van
Mobilio, which began production at the end of 2001, is compact, with many distinctive features, with a 7-seat minivan in three rows. Its appearance is quite original due to the large headlights, fashionable at that time, as well as an unusual oblong grille. If you look at the car from the side, you get a feeling of some openness. Perhaps this impression is created due to the large glazing area, which also makes you think about the roomy interior space of the car. They say that the main lines of the exterior design of Mobilio were taken from European tram cars.
The body is equipped with two hinged doors + two sliding doors + rear "gates". Interior design is in many ways new. It is worth paying special attention to the central part of the front panel, where the gear knob is located - it is made in a new style. The salon is very comfortable and convenient. Even with a cursory glance at the car, it becomes clear that it has a voluminous, roomy interior space. And the feeling of internal volume created by the large window area is fully justified. Of course, when all 3 rows of seats are in “working” condition, there is not much space left for luggage. But it’s worth folding the last row of seats, as it turns out quite a normal luggage compartment. Mobilio is powered by a 1.5-liter inline 4-cylinder SOHC engine and CVT transmission. There are versions with front-wheel drive and four-wheel drive. This car is economical in terms of fuel consumption.