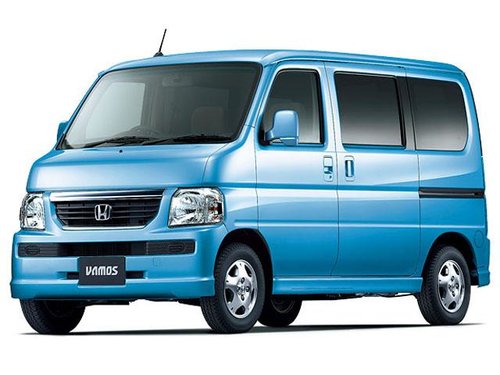 Accessories
Van
In 2007, Honda once again updated the second-generation Vamos microven (it has been produced since 1999). The bumpers of the car acquired a slightly more aerodynamic shape, a new rear optics appeared, the color line changed. A new version of Lowdown was added with lowered ground clearance (165 mm vs 190), fog lights, alloy wheels and a chrome radiator grille. A special version for those who like to travel with dogs is noteworthy - Travel Dog. It includes washable rugs and bedding, an upholstery with dirt and odor protection, and even a walking bag for dog supplies. Recall, the passenger Vamos was created on the basis of the Acty commercial van, but differs from it in improved transformation capabilities and a more comfortable cabin. The power line has not changed after modernization: Vamos is still equipped with 3-cylinder engines with a working volume of 0.7 liters, atmospheric or turbo (the latter until July 2010).  In subsequent years, Vamos, being a long-playing model on the market, received various changes more than once. For example, in June 2010, in connection with the cessation of the production of models with a turbo engine, on the basis of the L turbo lowdown version a special series was launched with an improved composition of equipment. At the same time, the separation of modifications by clearance height disappeared - all cars now come with a clearance of 165 mm. At the end of August of the same year, buyers of standard M and L trim levels were offered a “stylish package”. It included fog lights, 13-inch alloy wheels, a 3-beam chrome front grill, the rear bumper received an original decorative design with a mesh pattern, a beige trim and seat upholstery made of suede-like knitwear were added, the instrument cluster with chrome rims became more stylish blue backlight rings. In 2012, the previous trim line was replaced by the “G” version, the equipment of which corresponded to a high level while maintaining an affordable price - in addition to the options that were offered earlier, three new body colors were added, security systems were revised, and a multimedia system with a rear-view camera appeared .

The engines at Honda Vamos remained the same: a turbocharged 3-cylinder 12-valve SOHC and the same engine, but naturally aspirated. The basic atmospheric engine (45-46 hp) is equipped with a 5-speed manual gearbox (including 4WD options), or a 3-band “automatic”, and a more powerful (52-53 hp) - 4-band and all-wheel drive system. Turbo versions have a power reserve of 64 horsepower, only automatic transmission (4AT), rear-wheel drive or four-wheel drive. Gasoline consumption in atmospheric engines falls within the range of 5.6-6.8 l / 100 km. Supercharged versions consume 6.8-7.0 l / 100 km. A 36-37 liter fuel tank is enough to provide a decent range at full fueling.

The front suspension of the Honda Vamos is independent (MacPherson strut), the rear is dependent, such as De Dion, providing a comfortable and safe ride. The car is initially rear-wheel drive, and the front-wheel drive (on cars with 4WD) is connected only under certain conditions (4WD Real Time). The dimensions of the micro-van fit into the standards for subcompact cars: length - 3395 mm, width - 1475 mm, height - 1775 mm. The wheelbase has a length of 2420 mm. It is enough to successfully organize the interior space with a good supply of legroom for the rear passengers and allocate 260 liters of usable volume for the trunk, which can easily be increased by transforming the passenger compartment. Separate second-row seats fold completely into the floor, forming a flat area. According to the manufacturer, with a double passenger compartment configuration, two standard bicycles will enter the luggage compartment.

Of the safety systems, the basic equipment of all Honda Vamos 2007-2018 models includes two airbags (driver and passenger), belts with a pretensioning mechanism and force limits, child seat fastening mechanisms, and door stiffeners. In the list of options (standard for Turbo, and since 2015 standard for all trim levels) - ABS anti-lock braking system with BAS emergency brake booster and EBD electronic brake-force distribution function. In 2012, the headrests were redesigned to meet safety standards, and they became larger in size.

Considered a machine designed for spending free time, Vamos has everything that is necessary for a good rest. After the next update, the car became even more comfortable and safer. And this is still a very good option for the city, given its size and economy. Of course, you should not expect good sound insulation, and dynamic performance is good only in the version with a turbo engine. Of the main shortcomings of the model, the owners call windage, susceptibility to corrosion. And a small motor resource - it will not be difficult to disable the engine, especially if it is impossible to demand from the machine or not to comply with sufficiently strict manufacturer's recommendations.