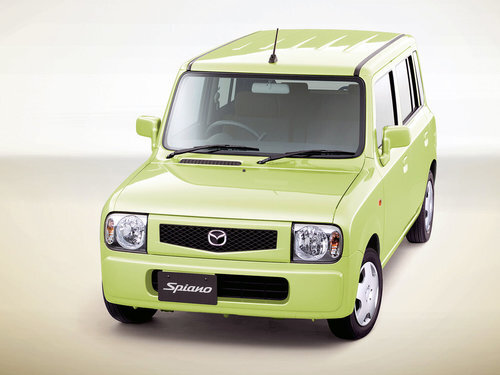 Hatchback
Mazda Spiano, born in an OEM partnership with Suzuki Alto Lapin, is not a typical representative of key cars. It seems that the developers did not think about getting the maximum internal space, they were driven only by a passion for "visual effects", and in retro look - in terms of body proportions, Spiano resembles the legendary Mini.
Outwardly, Spiano differed from Alto Lapin's radiator grille and lighting equipment, but was structurally identical to it. The transverse power unit was a 660 cc three-cylinder engine and a 4-speed automatic. The engine had a supercharged version and without it. Moreover, the turbo Spiano was offered in two versions in power: 60 and 64 liters. with. (SS grade). There was a modification with all-wheel drive.

In 2006, Spiano restyled. The hatchback received round headlights along with a different grille and other body colors. A CD / MD player and an analog clock appeared in the cabin. The charged version of the SS has become richer in matching logos, an exclusive speedometer and tachometer, and a leather-wrapped steering wheel. In addition, the most powerful Spiano has slightly changed technically: the suspension was reconfigured, the exhaust system ended with a once-through muffler.