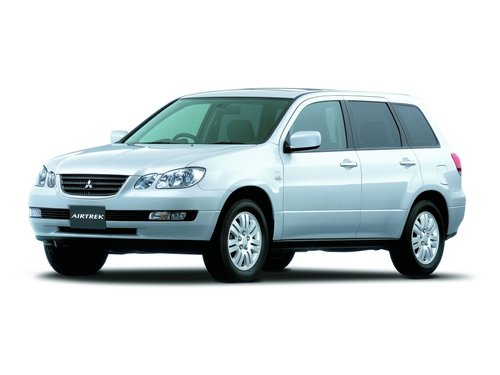 Electrics
SUV
In 2001, at the Detroit Auto Show, Mitsubishi introduced the Mitsubishi ASX concept car, which stands for Active Sports Crossover, and the car made a strong impression with its appearance and characteristics. Based on this supercar, Mitsubishi Airtrek was built, the name of which, in turn, means “air way” and was specially chosen in order to express the idea of ​​“freedom and unforgettable impressions”. Airtrek was only available in a 5-door version. This car can be called the continuation of the strategy of "universality", which was once put forward by the RVR model. Despite the outwardly compact body dimensions, the Airtrek cabin has enough space for comfortable accommodation of tall people. A later entry into the international market took place under the name Outlander - “Alien”. In the compact SUV market, special attention is paid to the vehicle’s performance characteristics, such as roominess, four-wheel drive and all-weather capabilities, which Airtrek fully complies with, and in addition to this impeccable handling and the driving style in which the station wagon feels, it added the image of an SUV with high ground clearance. The proof is that the body, which has a design in which the presence of previous Mitsubishi models is almost not felt, was “shod” in 16-inch wheels. In addition, there are no SUV labels on the cars. This applies to the interior: simple, but at the same time promising forms made the buyer think about the new approach of Mitsubishi to its products. The color scheme is diverse and gives joy to the consumer. In top-end trim levels, the car could offer xenon and front fog lights; electric windows, mirrors, seats, sunroof; remote key and immobilizer; autocontrolled air conditioning; multimedia system Pioneer Carrozzeria HDD, which includes an LCD monitor with navigation system, TV tuner and DVD, six speakers audio system.

The car uses a 2.4-liter inline 4-cylinder DOHC GDI series engine with a capacity of 139 liters. with. and a 2-liter inline 4SOHC engine of the same series with 126 hp In 2002, a 2-liter inline 4-cylinder 4G63T engine was added, developed specifically for the Mitsubishi Lancer Evolution, which in the turbo version develops 240 horsepower. And since 2004, the 2.4-liter power unit has been replaced by a new engine equipped with a variable valve timing system and a lift height of MIVEC valves and developing a capacity of 160 liters already. with. The cars were equipped with an automatic 4-speed gearbox with manual gearshift INVECS II Sport Mode manutronic.

Mitsubishi Airtrek has a 4WD Fulltime system or front-wheel drive (turbo modifications were offered only with all-wheel drive). Bearing body and independent suspension of all wheels (McPherson front and multi-link rear) provides the opportunity for comfortable movement even on broken roads. The car has a pretty decent wheelbase, which contributes to better comfort, but the minimum turning radius is 5.7 meters, which is quite a lot for a typical city dweller.

A set of security systems Mitsubishi Airtrek offered an initially high standard for its time and was constantly improved in the process of releasing and updating the model. In the basic equipment of all cars there are frontal airbags, ABS systems, distribution of brake forces EBD and emergency braking Brake Assist, three-point seat belts of all seats with force limiter and pretensioner. High approach to safety is confirmed by successful crash test results.

Mitsubishi Airtrek, which began to be produced in Japan much earlier than Outlander's global sales, could not go unnoticed by Russian buyers. In addition, the versions released for the domestic market have always been distinguished by the best "packing." In this regard, the right-hand drive Airtrek is still able to satisfy the highest demands, while at the same time offering interesting prices.