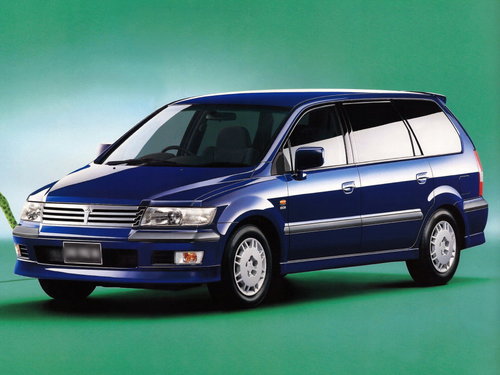 Electrics
Van
At the time of launch, Chariot was a car ahead of its era, but the third generation of this model already has to chase time, catching up with its competitors. The dimensions of this car are almost the same with the Honda Odyssey, which has gained high popularity. This model, to the name of which the word Grandis was added, began to be produced in 1997.
The capacity has increased significantly, but it has the same arrangement with the predecessors as the seats (scheme 2-3-2) and doors (4 doors + rear "gates"). As before, Chariot Grandis is available in front-wheel drive and all-wheel drive (FULLTIME) versions. The innovation is a modification with six seats located in three rows, two seats each. More angularly elongated compared to Odyssey body design has forced to attract the attention of consumers. There was a period when the level of sales of this model reached more than a sufficient mark, but this time quickly ended. The new Royal equipment, which initially used the 2.4-liter inline 4-cylinder DOHC engine, and a bit later the 3-liter V-shaped 6-cylinder DOHC engine was added, completely followed its competitor - Odyssey. The Chariot Grandis is equipped with an automatic transmission INVECS-II with a sports mode and the ability to switch to mechanical control. The wide front panel has an elongated shape, from which a very convenient and informative instrument panel is pulled out.