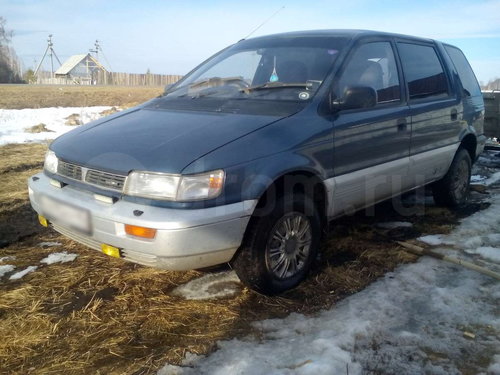 Electrics
Van
The second-generation Chariot went on sale in 1991 and was immediately rated as "a very well-sized car." It was not just the size that was meant, but a well-balanced balance between the external dimensions and the number of seats in the cabin, which, as you know, was as much as 7. The total length of the car was just over 4.5 meters, and it was a 5th-size body in width . Such dimensions subsequently turned out to be the most “demanded” among cars of the “family” category, if we take into account only cars with 3 rows of seats. This is said to mean that the model is ahead of fashion, but in a sense has defined it. The silhouette of the car came from joining the body of a conventional 4-door sedan tailgate, typical for cars such as "hatchback". The location of the seats was determined according to the scheme 2-3-2.
Initially, the car was equipped with only one type of engine, namely, a 2-liter 4-cylinder SOHC engine. But then the model range was supplemented by a similar engine with a working volume of 2.4 liters, then a 2-liter diesel engine, and finally, a 2-liter 4-cylinder turbocharged DOHC type engine, which could develop power up to 230 hp if it worked in conjunction with a manual gearbox. In combination with the "automatic" power slightly decreased and amounted to 220 hp. The car could be front-wheel drive or 4WD. By the way, the aforementioned forced-horsepower engine with a capacity of 230 horsepower was installed only on machines of the Resort Runner GT and GT-V category, in addition, they were on all-wheel drive of the Full time type. This combination was rightly called "Chariot Evolution." A series of Resort Runner cars was distinguished by the fact that they had a large sunroof, which began from the windshield and then was located directly in front of the front row seats. There was another version of the ceiling device, in which the roof was glass ("crystal lite roof"), and the large hatch did not tilt, but simply moved away.