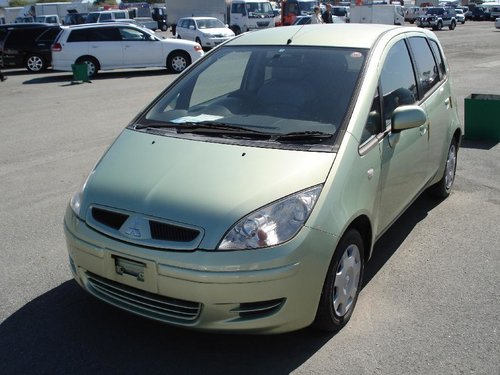 Electrics
Hatchback
Open
Mitsubishi Colt - a compact urban hatchback or small minivan - belongs to the European class “B”. The new generation of Mitsubishi Colt (Z30) is not a shortened version of the Mitsubishi Lancer, but an independent model of the segment, created on the same platform with Mercedes Smart Forfour (cars share about 60% of components and parts). As for the exterior design, the original appearance of the “Colt” is formed by an unusual line of the body, smoothly starting from the hood and sharply falling to the rear bumper. At the same time, the body visually tends to mono-volume, and the almost vertical and straight back part sets the practical shape of the luggage compartment. Compared to the Japanese version (and Colt has been sold at home since November 2002), the European version has slight differences in some external parts of the front and rear parts of the car (other grille, bumpers, moldings, etc.). d.). The release of the European version of the car was launched in the Netherlands at the NadCar plant.
Salon Mitsubishi Colt is interesting for its design, which is dominated by simplicity and novelty. Finishing materials are of high quality. In general, the level of equipment is quite high: power windows and central locking, steering wheel with vertical adjustment. Climate control includes a semi-automatic air conditioner, an air recirculation system in the cabin with heated rear passengers feet, an air filter that eliminates dust and odor is built into the system. The 2009 model received a changed appearance with a front part in the Lancer style, a 3-door version appeared.

The front suspension of the Mitsubishi Colt is a McPherson strut, and the rear semi-independent, on connected levers with a torsion beam and anti-roll bars. The steering has an electric power steering. The model has front ventilated disc brakes. The rear configuration in the Invite version is 8-inch drums, and the Instyle configuration is 14-inch discs. External dimensions of the machine: body length - 3870 mm, width - 1695 mm, height - 1550 mm. The wheelbase is 2.5 m. The ride height is 155 mm. The volume of the luggage compartment is 221 liters. The rear seats can be folded to increase the volume of the trunk or moved along the longitudinal rails not only in whole, but also in parts. But in cars released after 2008, this function did not.

Mitsubishi Colt combines compactness and functionality. It has record-breaking interior dimensions and a large number of transformations. Among the positive aspects of the car, the owners also note the ease of operation, maneuverability, efficiency. Of the minuses - the front side pillars that slightly worsen the visibility, the stiffness of the suspension, and low ground clearance. There are specific shortcomings in service - for example, inconvenient replacement of lamps in headlights. There are also complaints about the AllShift transmission (thoughtfulness, problems with the clutch actuator).
No description