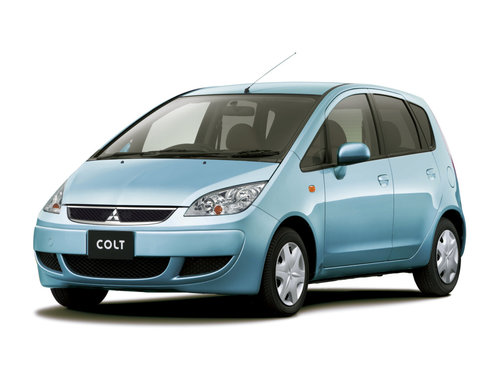 Electrics
Hatchback
After the restyling of the 2009 model year, the results of which were shown at the Paris Motor Show 2008, the Mitsubishi Colt received a completely new front end, rebuilt to the jet fighter-style radiator grille (“fighter”), familiar from the Lancer X. Together with new headlights and bumper it added to the appearance of the car aggressiveness. The rear of the body has completely changed. And in the cabin there was a new instrument panel, replacing the previous wells, the center console was updated. In addition to changes in the design of the exterior and interior, Colt has become more technological and comfortable: during emergency braking, a light alarm is turned on, the headlights are equipped with a delay shutdown function, the air conditioning system has been improved, the audio system has the ability to connect external multimedia devices, additional noise insulation materials are used in the cabin. The car is offered in a three-door version and a classic five-door version. Mitsubishi Motors installs two engine options on the new model: 1.1 liter capacity of 75 hp. and a volume of 1.3 liters with a capacity of 95 hp
In Russia, sales of the updated Mitsubishi Colt began in September 2009. The starting configuration was called Entry and provides a three-door version of the car with a base engine on the “mechanics”, with which a more advanced version of Inform is also offered, but it can already be in a five-door version. The top version of Invite is provided for both a five-door and a three-door hatchback, but the engine here is a 1.3-liter, offering two transmission options: conventional mechanics or robotic. If we talk about equipment, the best option is Inform equipment, where heated mirrors, heated front seats, air conditioning, and pockets on the backs of the front seats are added to the central lock and power windows (standard for Entry). In the expensive version of Invite with a 1.3-liter engine, a full-time audio system (radio / CD player with MP3 support) and an extended list of additional options were offered.

For the Russian buyer Mitsubishi Colt were offered two options for power plants. The basic version 1.1 5MT has 75 “horses” in stock (pretty good for a 3-cylinder engine) and a torque of exactly “hundred” Newton meters. The maximum speed in this modification is 162 km / h, and for acceleration from standstill to 100 km / h, it will take 12.8 seconds for a 3-door hatchback and 13.2 seconds for a 5-door. Gas consumption is 5.5 l / 100 km in the combined cycle. With a more powerful 1.3-liter 4-cylinder engine, the car already has 95 horsepower in stock. Transmission - 5-speed manual transmission or 6-speed "robot". Depending on the combination, the Colt can accelerate to a maximum speed of 178 or 180 km / h, and a 0-100 km / h acceleration time of approximately 11 or 12 seconds. Fuel consumption - 5.8-5.6 l / 100 km. The tank volume has not changed - 47 liters.

The front suspension of the Mitsubishi Colt is a McPherson strut, and the rear semi-independent, on connected levers with a torsion beam and anti-roll bars. The steering has an electric power steering. The model has front ventilated disc brakes, rear drum brakes. In the starting version, the car was equipped with wheels with 14-inch wheels, and in the more expensive - 15-inch wheels. With the update, the external dimensions of the hatchback were divided in length and height: for the three-door version it is 3880 and 1520 mm, and for the 5-door version it is 3940 and 1550 mm, respectively. Body width - 1695 mm. The wheelbase is the same 2.5 m. The ride height is declared at 169 mm. The volume of the luggage compartment is 214 liters in the five-door version and 169 liters in the three-door. The rear seats can be folded to increase the volume of the trunk - by the way, it has a decent opening and low loading height. Transformation capabilities are limited by the fact that the back row now does not move back and forth.

Together with the updated design, the buyer of the Mitsubishi Colt 2009 can count on improved safety equipment. The car has an anti-lock brake system with a brake force distribution system and brake assistance, two front airbags (passenger airbag with deactivation function), child seat fasteners. The car has a rigid cabin safety cage, with stiffeners in the doors, and front and rear there are special crumpled deformation zones. In 2005, Colt received 4 Euro NCAP stars.

The updated Mitsubishi Colt has become a little more comfortable compared to the previous version, although it has lost in practicality. Among the positive aspects of the car, the owners also note the ease of operation, maneuverability, efficiency. Of the minuses - the front side pillars that slightly worsen the visibility, the stiffness of the suspension. Engine 1.1 will not surprise with agility, but for urban operation its capabilities are more than enough, moreover, it is equipped with the usual "mechanics". The same option is preferable for a 1.3-liter engine, but sometimes there are complaints about the AMT transmission (thoughtfulness, problems with the clutch actuator).