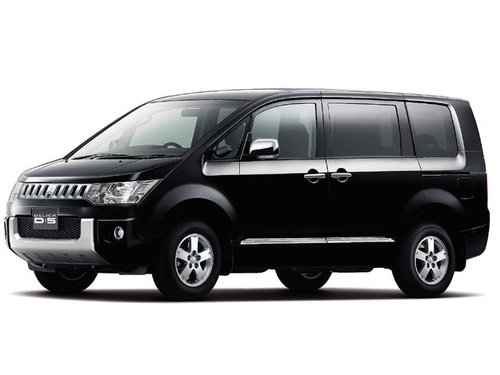 Electrics
Van
In 2007, the production of the fifth generation of the Mitsubishi Delica minivan began. In this generation, it was decided to change the name of the car, which began to be produced under the name Mitsubishi Delica D: 5. Like previous generations, the minivan has excellent cross-country ability. One of the reasons for this is the large tires that are usually installed on SUVs.
Compared with the previous generation of Mitsubishi Delica, the D5 has changed significantly. The designers presented a new front end with modified headlights, a bumper and a radiator grille. Front fog lights changed position. The new design received and taillights.

Inside, the color of the upholstery has changed. The armrest between the middle row seats was removed and two armrests were installed instead of it on the sides of the extreme seats. Headrests are now equipped with only the outermost seats of the middle row. The left armchair is installed separately, and the rest form a comfortable sofa. For ease of landing on the rear row, the Mitsubishi Delica D: 5 is equipped with sliding doors on both sides. The side doors of the second row are equipped with an electric drive and a closer. The rear seats fold down on the sides of the car and rise up, freeing up space on the floor. The middle row moves forward, freeing up enough space to fit several bicycles in the cabin. To secure cargo, each car is equipped with special lock cords.

Compared to the fourth generation, the size of the minivan has grown. Its length is 4730 mm, width - 1795 mm, and height - 1850 mm. The wheelbase of the Mitsubishi Delica D5 has grown to 2850 mm. The ground clearance of the car, depending on the modification, varies from 16 to 21 centimeters.

In comparison with the previous generation, the range of available motors has significantly changed. Motors 2.0 (150 hp) and 2.3 (148 hp) were added, while the 2.4 engine's power increased to 170 horsepower. Engines 2.5 and 3.0 in the fifth generation have disappeared from the list of available. Motors 2.0 and 2.4 operate on gasoline, and the 2.3 engine is diesel. Fuel consumption in the combined cycle for engines 2.0 is 6.7-7.4 liters, and for units 2.3 (148 hp) - 7.4 liters. The 2.4 engine consumes 8.9-9.6 liters of fuel in the combined cycle. In the city, consumption is 12.6 liters, and on the highway - 7.6. The fuel tank volume of the minivan is 66 liters. On versions with 2.0 engines, a start-stop system is installed that provides fuel economy. When the engine idles for a long time, it turns it off.

On the Mitsubishi Delica D5 minivan, either a CVT or a six-speed automatic is installed. Modifications are available with front-wheel drive and all-wheel drive. Cars with 2.0 engines (150 hp) are only available in front-wheel drive layouts. A Japanese minivan with a 2.4 engine is capable of accelerating to 190 km / h, gaining the first hundred in 10.8 seconds.

Car suspension - a combination of a suspension strut and a multi-link. Disc brakes (ventilated installed in front).

Version C2 is characterized by the presence of active head restraints and the absence of cruise control. Optionally, you can put cameras side view, rear and front view.

In the package exceed II, you can install an additional monitor for passengers and a parking assistance system. Options Chamonix is ​​characterized by the presence of an electric driver's seat and heated front seats.