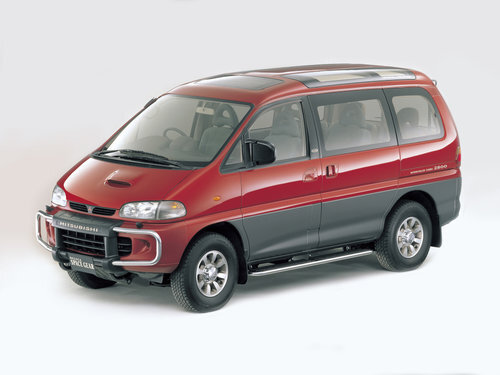 Best-selling parts
Truck
Van
The release of the fourth generation Mitsubishi Delica started in 1994. In 1999, for the first time in the lineup, a Mitsubishi Delika truck was introduced. The car is also known as Delica Cargo. The new generation was borrowed from Mazda and its Bongo freight model. Mitsubishi designers did not make any significant changes. Initially, two types of engines were installed on the Mitsubishi Delica truck: gasoline 1. 8 (90 horsepower) and diesel 2.2 (79 hp). In 2003, instead of the 2.2 engine, a more powerful turbocharged 2.0 unit (86 horsepower) was started to be installed on the car, and the gasoline engine was replaced by the 1.8 engine (95 hp).
Gasoline engines complied with the Euro-III environmental standard and consumed 9.6 liters of fuel in the urban cycle. A 2.2 diesel engine (79 hp) consumed 7.4 liters of fuel in the city. The fuel tank has a capacity of 58 liters.

A Mitsubishi Delika truck was produced with a four-speed automatic transmission or a five-speed manual. The car's drive could be rear or full (with a lowering row). Car suspension - a combination of a lever suspension and a beam. On the Mitsubishi Delica truck, ventilated disc brakes were installed at the front, and drum ones at the rear.

The release of the Delica truck continued until 2011, when it was decided to abandon this type of bodywork and focus exclusively on the production of minivans. The Mitsubishi Delica truck was produced in a short and long base. The short base is 4335 mm long, the width of the machine is 1690 mm, and the height is 1880 mm. The long version of Delica has the following dimensions: length - 4605 mm, width and height of the model are identical to the previous one. The wheelbase of both trucks is 2220 mm. The ground clearance of the car, depending on the modification, ranged from 140 to 155 mm.

One row of seats was installed in the car cabin, which could fit three people. For transportation of goods, an onboard platform was installed at the rear. Modifications such as a dump truck or a refrigerator with a different number of doors and the height of the refrigerator were produced. The maximum load capacity of the cargo version of Mitsubishi Delika is 1000 kg. A car lift could be installed on the car.

A standard set of options available on the truck includes a driver's airbag, power windows, power steering, air conditioning and a radio with speakers. An optional front passenger airbag could be installed. The Mitsubishi Delica truck was available in DX and GL trim levels.
At the end of the 90s of the last century, Delica went far from the generation whose representatives could have utilitarian cargo versions. And there was no longer any opportunity to create something original, original in Mitsubishi. But there was a collaboration with Mazda. The Delica truck and the Delica Van minibus are Bongo with a three-diamond logo.
Mazda's design has not changed. The longitudinal arrangement of the power unit, a 1.8-liter gasoline engine or an atmospheric 2.2-liter diesel engine, which was replaced in 2003 with a 2.0-liter turbo unit and a little more powerful. Transmission - "mechanics" or "automatic", rear-wheel drive or full. Moreover, the latter had a lowering row.

The minibus was rich in simple upholstery of the cargo compartment and on a single sofa behind the front seats - well, if with fabric, not dermatine upholstery (folds horizontally, is placed vertically or even dismantled). But it offered two options for the height of the roof, low-floor versions, with one or two rear sliding doors. Trucks, depending on the carrying capacity (up to 900 kg), had a single or double bus back. The rear-wheel-drive Van could have a cargo lift. The truck had the same option. And besides it, Truck is able to carry a refrigerator of various heights and with different doors, a tipper body and an ordinary platform with sides.