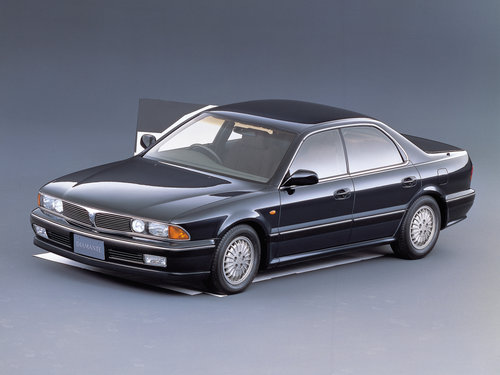 Electrics
Sedan
Wagon
In 1990, during the heyday of the soap bubble economy and thanks to a change in taxation in Japan, the road was opened for the production of large high-class cars. Diamante, launched in 1990, opened this road. Its body had dimensions that did not fit into the head of the then Japanese; for example, the width was 1775 mm. It was equipped with 2-, 2.5- and 3-liter V-shaped 6-cylinder engines. This car completely turned the Japanese view on the body of the 3rd size. The classic “box-shaped” body design and hood shape, giving the car a resemblance to BMW models that were extremely popular at the time, were the main reasons for the rise in Diamante's popularity.
It was the only car of that period, which was equipped with the latest science and technology. Here, an automatic valve clearance system was used, as well as 4 electronic systems: 4WS, TRC, ABS and Easy Drive. As a result of partial changes in 1992, the new 4-speed automatic transmission INVECS began to be used on Diamante.

Diamante was produced in the “hard top” body, that is, it had frameless doors, and its closest relative in the sedan body was the Mitsubishi Sigma, which in terms of configuration was almost no different from Diamante.
In the period of growth of the soap bubble economy and changes in taxation in Japan, large-scale luxury cars began to be produced in large volumes. One of them was the Mitsubishi Diamante, which was presented in 1990. Initially, production of cars was launched in hardtop and sedan bodies, but in 1993 the Australian branch of the company introduced a new body - a station wagon, which is a full-size car. The car is based on the Diamante sedan and the Mitsubishi Sigma model. The first-generation station wagon continued until 1997, while the first-generation sedan was replaced by the next version back in 1995. The Mitsubishi Diamant wagon was produced with a right-hand drive and, in addition to Australia, was also sold in Japan.
Externally, the Mitsubishi Diamante sedan and wagon are similar, but they also have significant differences in design. The Wagon version is deprived of front fog lights, otherwise the taillights of the car are also decorated. The interior design of both cars is identical: expensive upholstery, wood inserts on the front panel, center console and doors.

Distinctive features of the car are a roomy interior, a large trunk and an unusual manner of movement, not like cars assembled at Japanese plants. Station wagon Mitsubishi Diamante is designed for landing five people. The length of the station wagon is 20 mm shorter than that of the sedan - only 183 cm. The front seats of the station wagon have lateral support, and on the rear seats there are only two head restraints, so the passenger sitting in the middle will be less comfortable, despite a comfortable fit. Trunk volume is 418 liters. Oversized cargo can be transported using rails.

Only the three-liter V6 engine with a capacity of 165 horsepower and a maximum torque of 251 N * m was installed on the Mitsubishi Diamond station wagon. The engine runs on gasoline and in the urban cycle consumes 8.3 liters of fuel. The gas tank of the car is 71 liters. The Mitsubishi Diamante station wagon was produced with front-wheel drive (the sedan could have been all-wheel drive) and was supplied with a four-speed automatic transmission. Car suspension - McPherson suspension strut in front and a dependent five-arm rear. On the station wagon installed ventilated disc brakes. On some modifications, rear discs were installed. The Mitsubishi Diamant wagon was produced in the 30V and 30R-SE trim levels. The basic equipment included a power steering, electric power for the side mirrors, a rear spoiler, a leather steering wheel braid, height adjustment of the steering column, power windows, electric power for the front seats, child seat mounts, a cassette player and climate control. An adjustable sunroof was installed on the roof. Safety of people in the cabin is ensured by seat belts, reinforcing agents in the doors.

The luxury 30R-SE was equipped with leather seats and a driver's airbag. Active suspension provided these modifications with an additional 10 mm of ground clearance.