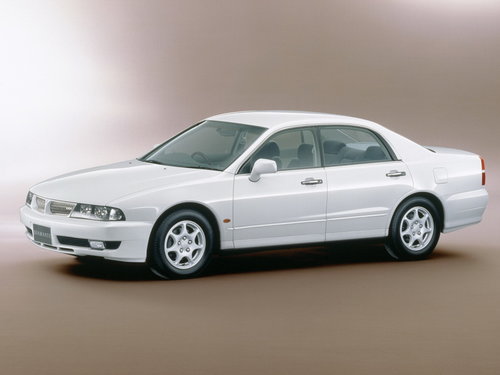 Electrics
Sedan
The release of the Mitsubishi Diamante sedan started in 1990. Five years later, the second generation of the car was introduced. For ten years of production, the Mitsubishi Diamond sedan experienced two restyling: in 1997 and 1999. In the new generation, the car was equipped with many new products, which were then widely adopted. The Mitsubishi Diamante sedan was equipped with improved engines with a complete fuel combustion system, Traction Control (a system for monitoring the trajectory of movement on the road), a hydraulic booster with a multi-valve system, a 4WS system that provides stability at high speeds and better maneuverability, door lock systems, pressure drop alerts in tires and safe opening / closing of the hatch and glasses with protection against pinching. The 1999 Mitsubishi Diamante sedan differs from its predecessor in its modified radiator grille, the shape of the taillights, which have become more compact, and the rims. In the cabin, the position of the buttons on the center console has changed, the size of the monitor on the front panel has increased, the color scheme of the trim has changed.

All modifications of the sedan are available with an automatic transmission: with motors 2. 5 is set four-speed, and with engines 3.0 - five-speed. The INVECS-II gearbox operates in semi-automatic mode and sports mode is available. The Mitsubishi Diamant sedan was produced in front-wheel drive and all-wheel drive layouts, and modifications with 2.5 engines (170 hp) were equipped with only front-wheel drive.

Chassis after restyling has not changed: multi-link suspension and ventilated disc brakes. All wheels are equipped with anti-lock braking system (ABS).

For the Japanese market, the Mitsubishi Diamante sedan was produced with right-hand drive and was available in 25V, 25V-SE, Espada, 30R and 30R-SE luxury versions.

Safety in the cabin is ensured by airbags (front and side) and stiffeners in the doors. The car has cruise control, auxiliary braking system, climate control and a CD player.

The Mitsubishi Diamond sedan in version 25V-SE includes the ability to adjust the steering wheel to reach, leather seats, electric front seats. In the Espada version, the sunroof is only provided with the E package, which also includes a front stabilizer. Also among the available options there are no leather seats, cruise control and auxiliary braking system.

The 30R equipment from the previous version is distinguished by the presence of leather seats, and in the 30R-SE version cruise control is again available.