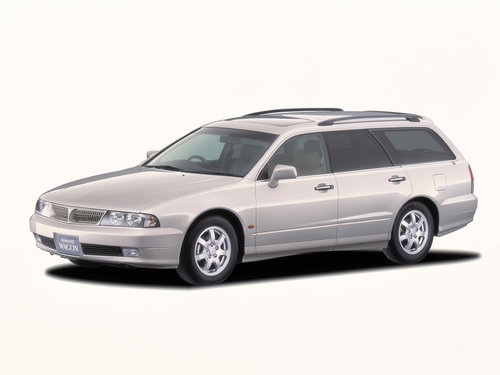 Electrics
Wagon
Sedan
Diamante Wagon is manufactured at the Mitsubishi branch in Australia and has been imported to Japan since 1993. This car was praised for its excellent stability on the road and a comfortable fit, and gained great popularity. In 1995, the 2nd generation of Diamante appeared in Japan, and the Diamante Wagon continued to be imported in its original form until 1997 - only this year it was updated. Diamante Wagon has the largest body sizes and the largest wheelbase among Japanese station wagons. This car is also characterized by a huge interior and a very roomy luggage compartment. The wide roof, "flowing down" to the rear of the body, and the side surfaces, similar to large mirrors reflecting sun glare, incredibly smooth ride and high comfort conjure up associations with a sea liner drifting along the waves. All these features served as a new impetus to the popularity of this model.

It uses the well-proven 3-liter V6 SOHC engine for a long time, in addition, on its 24-valve version, due to some improvements, it was possible to increase power to 200 hp. A feature of the model is the use on this engine of a 5-speed automatic gearbox INVECS-II with a sports mode and the possibility of manual control.
Diamante took on the role of a herald broadcasting Mitsubishi's high-tech achievements. The second generation of the model, which began to be produced in 1995, has incorporated many of the latest achievements in the field of mechanical engineering. The machine is equipped with an engine with a complete fuel combustion system, a traction control system and a trajectory control system (TRC - Traction Control), a multi-valve power steering system that provides high steering sensitivity at any speed, and a 4WS system that automatically responds to the speed and position of the steering wheel. In addition, an automatic transmission INVECS-II with a sports mode and the possibility of mechanical control is used. There is also a system for previewing and monitoring the distance, a warning system for an emergency decrease in tire pressure, a door locking system, a safe window and sunroof system that prevents pinching.
Thus, this car was generously gifted with all the latest achievements that his classmates could not even dream of. Diamante only uses DOHC V-shaped 6-cylinder engines from 175 hp. (2.5 L volume, Lean Burn) up to 270 hp (volume 3 L, MIVEC). The DOHC engine uses a 5-speed automatic transmission with sport mode.