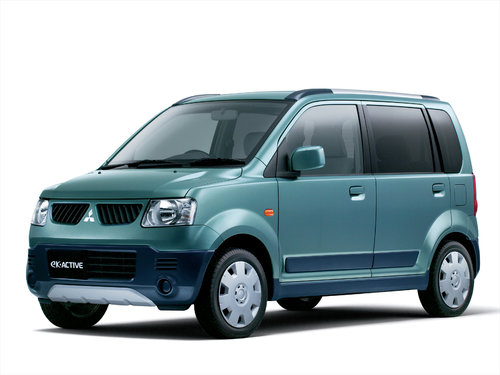 Electrics
Hatchback
First, under the slogan "give a good subcompact!" The eK-Wagon wagon was released. Then, one after another, no less remarkable cars eK-Sport and eK-Classy followed. Under the fourth number in the eK lineup is the eK-Active car. Its concept can be expressed with the phrase “three pleasures in one eK”, which in Japanese sounds like “Miracle eK”. It was planned to make it so that in any conditions it would justify its universality. The most important thing that immediately makes him attractive is that in style he is a spilled SUV car. The vehicle’s ground clearance is 10 mm larger than that of the eK-Wagon, the car is equipped with 14-inch wheels as standard, which allows it to calmly overcome sections of the road with poor coverage. The motor can be either a simple inlet or a turbo.
The appearance of the Mitsubishi eK Active is very energetic, and this is thanks to the side trim panels, front and rear decorative panels that mimic the protective plates of the bottom of the machine in combination with large-sized bumpers of a special shape. The front decorative radiator grill is made in the manner typical of the latest Mitsubishi models (meaning the situation for 2004). There are roof rails. The trim is of a higher quality than the eK-Wagon, in the "tidy" used a digital-analog combination, like the eK Sport. The main configurations are V with an aspirated and advanced VT with a turbo. The basic version includes air conditioning, a rear wiper. The VT model features a fully automatic air conditioning, synthetic leather braided steering wheel, and a large central armrest.

In Mitsubishi eK Active, similarly to the eK Sport model, one of two engine options can be installed. In the simplest versions, it is an atmospheric 3-cylinder 12-valve SOHC engine that develops a maximum power of 50 horsepower (6500 rpm) and a maximum torque of 62 Nm (4000 rpm). Powerful modifications are equipped with a turbocharged engine, which with the same volume of 657 cc produces 64 hp (6000 rpm) and 93 Nm (3500 rpm), giving the car more serious dynamics. Transmission - only automatic 4-speed. The car was produced in front-wheel or all-wheel drive (4WD FULLTIME) version. Gasoline consumption is 5.2-6.6 liters per 100 kilometers, the size of the fuel tank meets the needs of this car - 30 liters.  When developing the design of the chassis, the engineers managed simple solutions - an independent front suspension with MacPherson struts, and a rear suspension on trailing arms. Steering - rack type with an amplifier. The design of the brake system is also without surprises - disk mechanisms on the front axle and drum mechanisms on the rear. The wheelbase of this micro-station wagon has a size of 2340 mm and a turning radius of 4.6 meters, which is only 0.2 m more than other derivatives of the eK-Wagon line. Interior dimensions are similar to the base model: 1830 x 1220 x 1280 mm (L x W x H). The trunk of the Mitsubishi eK Active is also no different from the eK Wagon, it is small in size - this is understandable, given that the car is only 3.4 m long. In order to carry more things, you can fold back the back seats - they fold in relation to 50:50 (four-seater car), but not on a flat floor, but with a small step. Given the special situation of the Mitsubishi eK Active, this model was fully equipped with security systems. An SRS airbag system for the driver and front passenger, an ABS anti-lock braking system with EBD (electronic brake force distribution) and a brake assist system are all standard.

High compact minivans have become a new trend in the market of light compact cars. We can say that eK Wagon was the product of this trend, and after the release of eK Sport and eK Classy models, the manufacturer did not forget about outdoor enthusiasts. Thanks to its high ground clearance and special suspension adjustment, the Mitsubishi eK Active feels good on city streets, on highways, and on mountain roads - in a word, it turned out to be a truly universal “station wagon” - a minicar. Its other advantages: ease of management, economy, ease of maintenance. Disadvantages - cramped rear, poor insulation, stiff short-stroke suspension, weak atmospheric engine.