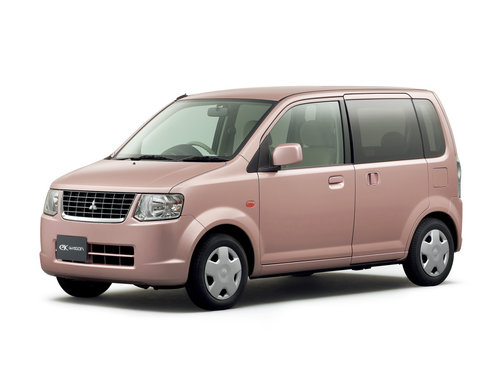 Electrics
Hatchback
The Mitsubishi eK Wagon of the second generation updated in 2008 changed the front of the body due to the large chrome grille and a new bumper. Functionality has become wider, in accordance with the needs of customers. In addition, engine settings were revised, resulting in a more efficient fuel consumption (plus 0.2-0.5km / l in 10-15 mode). The power unit itself remains the same - a 0.7-liter three-cylinder engine with a capacity of 50 horsepower. The modernization affected the interior of the Mitsubishi eK Wagon in detail. In the interior of models equipped with a sliding door with an electric drive, water-repellent materials appeared. Standard equipment of more expensive trim levels includes heated driver's seats, convenient adjustable hooks on the back of the front passenger seat, a 7-inch navigation display, and more. The production of electric sliding door models on the left side continues, including the Marble edition special version for mothers with young children. The new equipment is the MX version with carefully selected equipment at the best price, and in 2009 the “limited” series is added with an even more interesting price. In January 2010, the bright Joy Field model was released - it is distinguished by white side turn signals, a standard electric sliding door, chrome mirrors, a leather steering wheel (option), etc.

The manufacturer still does not consider it necessary to change anything in the mechanical part of the Mitsubishi eK Wagon. In cars from 2008-2013, the same 3-cylinder 12-valve SOHC 3G83 engine is installed. With a working volume of 657 “cubes”, it gives a maximum power of 50 horsepower (6500 rpm) and a maximum torque of 62 Nm (4000 rpm). Aggregates the engine of your choice with a 5-speed “mechanics”, 3- or 4-speed “automatic”, the selector of which is located on the dashboard. The car was produced in front-wheel or all-wheel drive (4WD FULLTIME) version. After the upgrade, fuel consumption was reduced to 4.3-5.3 l / 100 km (before, the consumption was 4.7-5.7 l per 100 km, depending on version). The size of the fuel tank is 30 liters.

In the second generation, the Mitsubishi eK Wagon adopted from its predecessor not only the engine and transmission, but also the entire chassis. As a result, such parameters as the size of the wheelbase (2340 mm), track gauge (1300 mm) and the turning radius (it is very modest 4.4 meters) have not changed at all. Front independent suspension with MacPherson struts, and rear dependent on trailing arms. Steering - rack type with an amplifier. Traditional design brake system with disc mechanisms on the front axle and drum mechanisms on the rear. The dimensions of the body are the same as the predecessor, they have not changed after restyling: 3395 x 1475 x 1550 mm (L x W x H). The dimensions of the second-generation eK Wagon interior are: length 1895 mm, height 1290 mm, width 1275 mm. The left rear door in some models is a sliding type. Its guide does not protrude outside and does not spoil the appearance of the car, this design increases convenience in tight parking, and the opening dimensions are 1005 x 530 mm.

In the second generation, the Mitsubishi eK Wagon has become safer by adopting a new steering column with shock-absorbing design and a secure pedal assembly. The standard equipment includes two airbags (for the driver and front passenger), seat belts with restraints and pretensioners. An anti-lock braking system with a brake force distribution system and an emergency braking assistant was installed as an option in basic models or standard in more expensive ones. In 2012, safety was further increased - the size of the head restraints was increased, ISOFIX child seat mounts were standardly added in all trim levels.

Recall that the second generation of the eK Wagon was released in September 2006. In fact, retaining the concept of its predecessor, which gained popularity, the new model made a leap forward in terms of comfort. Pros: ease of operation, economy, convenience for shopping, ease of maintenance, good ground clearance. Disadvantages: cramped rear, poor sound insulation, stiff short-stroke suspension, weak engine. But the manufacturer also produced a modification of eK Sport, which was distinguished by a sporty appearance, and a more powerful turbo engine served as an addition to the “aspirated”.