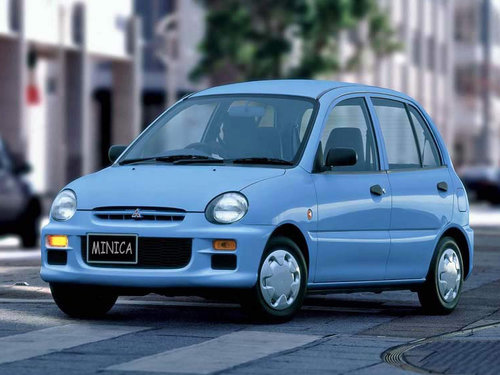 Electrics
Hatchback
The release of the 7th generation of the Mitsubishi Minica was in 1993. Minica has a nice, one might even say, cute body design with such an eye-catching element as round headlights. This model was developed along with the Minica Toppo, and its interior space increased.
Minica is available in 3- and 5-door versions. The in-line 3-cylinder engine, installed on the previous generation of the model, was replaced by an in-line 4-cylinder. An event was the use of a 4-speed automatic transmission INVECS on this car and the first 20-valve engine installed on a compact car. The sports 3-door Dangan modification was not forgotten (the word “dangan” in Japanese means “bullet”, “shell”). Its inline 4-cylinder 20-valve turbocharged DOHC engine with intercooler is capable of developing a capacity of 64 liters. with. On all-wheel drive versions of the Dangan modification, only a 5-speed manual gearbox is used.

A large number of Minica modifications were released, among which one can distinguish Guppy, designed mainly for women and distinguished by the presence of bright colors in the bodywork, as well as Town Bee, which has an individual, original “face”.