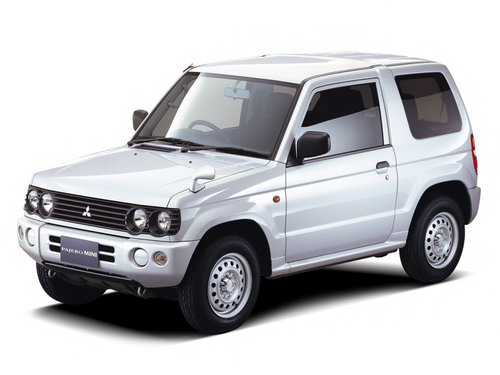 Electrics
SUV
The first generation of this lightweight compact car, the design of which is made in the style of the Mitsubishi Pajero SUV, was released in 1994. In October 1998, in connection with the introduction of new standards for small cars, a complete change was made to the model. Thanks to the increased wheelbase, the interior of the second generation has become more spacious. The improved model, like the previous one, gives a sense of security, but in general, the updated Pajero Mini has become better feel and hold the road. However, despite the fact that the car has an all-metal body of a prefabricated structure, which includes a frame and a stiffening frame, it is more correct to call it a compact station wagon with off-road inclinations.
Compared with the previous generation, the demand for an updated car exceeded all expectations, and in terms of the number of modifications offered, the Pajero Mini could compete with the "big brother". A feature of the new generation was an increase in the level of equipment. At the same time, the car didn’t add to the price at all: the most inexpensive option in the basic version 660 S, which is driven by a conventional atmospheric engine and has rear-wheel drive, was still very affordable - its starting cost was a little more 1 million yen. The manufacturer offered a number of special versions, among them: the "street" Duke model with a large chrome grille and body kit, an inexpensive rear-wheel drive version of the Skipper. The musical performance of Sound Beat Edition with the advanced Mitsubishi Electric 2DIN MD / CD audio system with CD changer, the youth editions of Snoopy Edition and Snoopy Edition II and many others are interesting. In 2005, Pajero Mini receives electrically folding mirrors as standard, glass with improved protection against ultraviolet and infrared rays, air conditioning with anti-allergenic filter, and a new optional navigation system with HDD.  The second generation Pajero Mini uses 2 types of inline 4-cylinder engines at the start of sales: the 16-valve SOHC and the 20-valve DOHC with intercooler and turbocharging. Compared with the previous generation, their power characteristics have not changed. The base engine, with Lean Burn MVV-type technology, operating on the principle of "lean combustion", provides good efficiency and has a capacity of 52 liters. with. The DOHC20 turbo engine produces a maximum of 64 hp. The specific power is still low, hence the fuel consumption is not very modest, especially if you adhere to the rule "gas to the floor - gas to the wind." Nevertheless, the Pajero Mini will appeal more to those who do not require much from a compact car, and the resource will be saved longer with a gentle attitude. In 2002, the turbo unit was replaced by a more economical and environmentally friendly 16-valve SOHC of the same capacity.  Among the used cars of this model, as a rule, all-wheel drive variants with Easy Select 4WD transmission prevail. Thanks to her, as well as its ground clearance and light weight, the Pajero Mini has a very decent cross, amazing for such a baby. The dimensions are modest, but, of course, the interior is not impressive in size - it is still more likely an option for a small company. Thanks to the rack and pinion steering mechanism and a short base, the car has a minimum turning radius of 4.8 m. Unlike the previous generation, the new Pajero Mini acquired a 4-speed “automatic” (previously there was a 3-speed automatic transmission), as an option, the “mechanics” are also offered. If we talk about the suspension, then the racks are used in front and the dependent structure in the back.

Initially, for the new generation of Pajero Mini, the standard was to equip only a driver's airbag. Over time, the approach has changed and there are already two frontal airbags in the standard configuration, as well as a set of electronic safety systems minimally necessary for the requirements of the time, including anti-lock braking system (ABS) and auxiliary braking system (BAS), which are standard for turbo models. Despite its miniature size, the car has a fairly strong frame that can protect the driver and passengers in a collision. In 2001, in a crash test, the JNCAP Pajero Mini received a high 5-star safety rating and was recognized as one of the best cars in its class.

Mitsubishi Pajero Mini is a great example of a compact SUV with a full four-wheel drive transmission, equally convenient both in the country and in the metropolis. There are drawbacks like "goat", a simple and cramped interior, a small engine with a small resource. In 2008, restyling was carried out. The Pajero Mini has a “twin” in the form of Nissan Kix, the production of which is carried out under the OEM agreement.