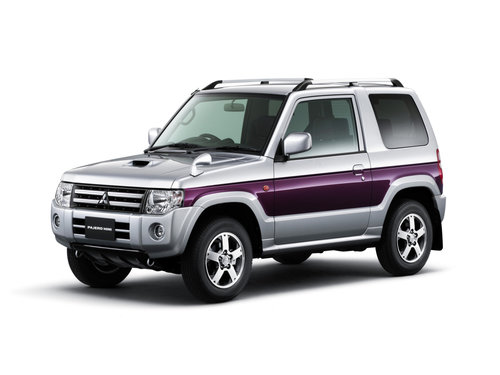 Electrics
SUV
In September 2008, Mitsubishi began selling a restyled version of the compact Mitsubishi Pajero Mini SUV. The front part has been updated so that the Mini looks more like “big padjeriks”, changed the appearance of the rear combined lamps, and also centered the position of the reserve. Another improvement is the optimization of engine performance, which resulted in a reduction in fuel consumption. Inside the Pajero Mini, the appearance of the central panel has been updated. The main indicators are silver-plated, the seats are covered with new material. Added cozy utilities. From the driver and passenger side appeared holders for glasses. The cabin now has an additional small glove box located above the main one.
The updated Pajero Mini has received various improvements in terms of comfort. Continued release of special series. An interesting edition is the White Pearl Select with a pearl body color, standard foglights, a leather steering wheel and heated driver's seat. In 2009, an inexpensive 660 limited rear-wheel drive package appeared, costing less than 1 million yen. Although, of course, expensive options are more interesting. For example, Duke modifications, which due to four round headlights and the original design of the front of the body have a sporty image. Richly equipped versions have a TV tuner, a navigation system, a rear-view camera, a leather steering wheel, heated seats, a sunroof and other attributes of "adult" cars. Toward the end of the release, the luxurious Premium Selection series appeared - the car received water-repellent glass front doors, chrome mirrors, combined seat trim and a interior mirror with a built-in 3.3-inch rearview monitor. With the Navi Edition package, a new multimedia system with advanced external connections and an SSD-drive instead of the HDD.

Mitsubishi Pajero Mini is equipped with a turbo engine of 660 cc. or its naturally aspirated option. Power - 64 and 52 horsepower, respectively. The 4A30 power unit has a 4-cylinder design with one camshaft and four valves per cylinder (SOHC16) and is aggregated with a 4-speed automatic transmission or 5-speed manual. The plug-in four-wheel drive Easy Select 4WD will make driving on the ground and country roads more comfortable. As befits an SUV, it is equipped with a two-speed transmission with Hi / Low modes.

Pajero Mini has an independent front suspension and rear dependent. It has excellent permeability parameters: a large ground clearance of 195 mm, an angle of entry of 38 degrees and an exit of 46 degrees. The driver's seat is characterized by a viewing level at about 1.4 meters above the ground. The wheelbase of the Pajero Mini is 2280 mm. The value of the turning radius is 4.8 meters. The car belongs to the Kei class, so its dimensions are small. The length of the SUV is only 3395 mm with a width of 1475 and a height of 1635 mm, and the curb weight is 850-990 kg. The interior does not seem spacious: length 1665 mm, width 1220 mm, height 1210 mm. The folding rear seats can be used to increase the small trunk. The Mitsubishi Pajero Mini has two frontal airbags, as well as anti-lock braking system (ABS) and auxiliary brake system (BAS), which are standard for turbo models. Technical improvements did not pass by the restyled Pajero Mini: if you forget to buckle up, the car will draw your attention to this. A new feature in 2011 was an anti-glare mirror with a built-in rear view camera display. Despite its miniature size, the car has a fairly strong frame that can protect the driver and passengers in a collision. In crash tests, the JNCAP Pajero Mini received a high 5-star safety rating and was recognized as one of the best cars in its class.

The compact Pajero Mini of the second generation in a restyled version has the advantage of more recent years of production and a better technical condition of the machines on the market. Mitsubishi Pajero Mini is a great example of a compact SUV with a full four-wheel drive transmission, equally convenient both in the country and in the metropolis. There are drawbacks like "goat", a simple and cramped interior, a small engine with a small resource. In 2008, the Pajero Mini appeared a “twin” in the form of Nissan Kix, the production of which is carried out under the OEM agreement.