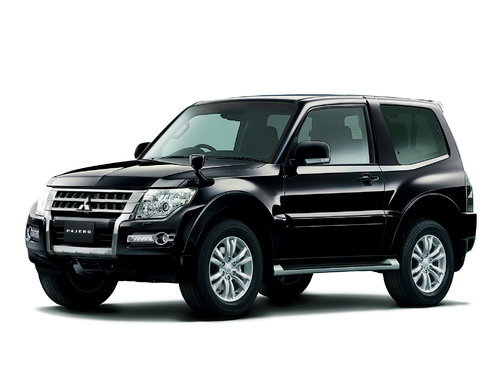 Electrics
SUV
Sales of the fourth generation of the legendary Mitsubishi Pajero SUV started in 2006. The history of the model dates back to 1982. By the 25th anniversary, about 2.5 million copies were produced. Mitsubishi Pajero has gained an excellent reputation in more than 170 countries and regions of the world. The new generation continued the previous course, implemented in the previous generation, - a multi-purpose highly comfortable SUV with a supporting body, independent suspension of all four wheels and a Super Select 4WD transmission, providing optimal dynamics on the highway and maximum traction on off-road. The exterior design underwent a change, and the car took a calmer, fit look, containing features of the continuity of generations.
Pajero IV is offered in the domestic market in 3- and 5-door versions, respectively with 5- and 7-seater saloon. The very impressive difference in cost between the most expensive and the most utilitarian version only emphasizes the general availability of the model in the domestic market, which can truly allow its owner not to limit his freedom of movement. For those buyers who welcome active style, simplicity and unpretentiousness, Pajero is offered in the ZR-S and ZR variants with a long body, as well as the VR-II and VR-I with a short base. For those who focus on luxury and equipment of the highest level, the complete sets of the Super Exceed, Exceed X and Exceed series are offered. At maximum equipment, the car offers: front and rear fog lights, alloy wheels, sunroof, xenon headlights, headlight washers, electric front seats, leather interior, cruise control, DVD audio, navigation, chic LCD display, winter set, including heated seats, mirrors, washer nozzles, as well as other attributes of a premium car. Mitsubishi Pajero is equipped with three power units. Gasoline 3-liter 6G72 engine with 178 hp It is offered for low-cost versions and is equipped with both an automatic 5-speed and a mechanical 5-speed gearbox. The 4M41 turbodiesel (4-cylinder, DOHC) with direct injection has a power of 190 hp. and is equipped only with an "automatic", as well as the top version with a 3.8-liter 250-horsepower 6G75 gasoline engine. One of the innovations in this engine was the MIVEC automatic electronic valve timing system, which aims to reduce fuel consumption and engine vibration at both maximum and light loads. At the same time, if the younger gasoline engine consumes Regular gasoline (AI-92, AI-95), then the 3.8-liter is very selective and should only be refueled with premium premium fuel. The independent Mitsubishi Pajero suspension provides a high level of comfort. Note the reliability of the chassis in general and the Super Select 4WD II transmission in particular. In the new generation, the transmission has become even more perfect, thanks to an asymmetrical center differential, which distributes torque between the front and rear wheels at a ratio of 33:67 under normal driving conditions (dry road), reducing the understeer effect that is characteristic of many SUVs. When the viscous coupling wheels slip, it automatically blocks the interaxle differential (50:50 torque distribution), improving the car’s passability and increasing active safety on slippery roads. With one movement of the transfer case lever, one of the three transmission modes (rear-wheel drive, four-wheel drive, four-wheel drive with a locked center differential) can be switched on up to 100 km / h. At the same time, in order to avoid damage to the transmission components, the electronics will not allow to turn on the wrong mode.

Thanks to the front and rear deformation zones, the supporting body of the new Pajero with the collision safety system RISE (Reinforced Impact Safety Evolution) protects passengers, regardless of which side the collision will occur. The sturdy frame creates a powerful steel cage around passengers. A wide range of electronic systems provides active safety: anti-lock braking system ABS, EBD (brake force distribution) system and electronic stability control, which determines the likelihood of loss of control and transfers additional braking force to the wheels that it needs, helping to keep the car in the desired trajectory.

Right-hand drive Mitsubishi Pajero fresh years of release are not as widely represented on the secondary market as previous generations, but the confident development of the left-hand drive sector still affects.