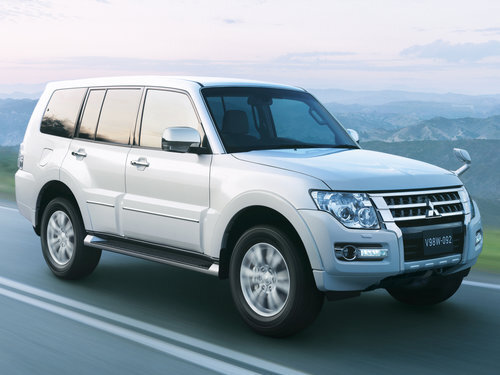 Best-selling parts
SUV
The new fourth-generation Mitsubishi Pajero SUV entered the Russian market for sale in 2006. The main differences from the previous model apply to the design of the body and interior, the new engine, brake system, as well as the transmission. The updated Pajero has become more elegant, while the manufacturers decided to move slightly away from the sports image. So, the new model received more even features, due to which the manly appearance of this SUV only intensified. At the same time, recognition with the previous generation remained.
Among the features of the basic configuration of the model, we can distinguish the presence of a winter kit, which includes such useful options as heating the windshield washer nozzles, electric heating of mirrors and front seats, in addition, there are rear fog lights, side mirrors with direction indicators, climate control, numerous electronic systems responsible for comfort and safety. Side mirrors and door handles are painted in body color. In more expensive trim levels, the car may have a sunroof, a rear spoiler and leather seats with electric adjustment, a 9-inch widescreen display with a DVD player, a navigation system, a rear-view camera for parking assistance. The trunk of the Pajero IV has a large number of drawers for storing a variety of little things, two outlets, and in expensive versions there is a subwoofer that is part of a chic audio system designed to enjoy the sound of the driver and passengers. The car is equipped with three engines. These are two gasoline power units and a diesel. Of the first in terms of thrust-to-weight ratio, the 3.8-liter version, with a power of 250 hp, equipped with an electronic control system for the gas distribution phases and the lift height of the MIVEC valves deserves the greatest interest. On models until 2011, this engine is adapted for the conditions of countries with a cold climate, is designed for operation on 92nd gasoline and meets Euro-2 standards. Since 2011, the more modern version has the ecological type Euro-4 and the type of AI-95 fuel used. Less whimsical is the gasoline three-liter engine with a capacity of 178 hp, consuming the 92nd gasoline. 3.2 L turbo diesel with 200 hp It has an electronic direct injection system and a timing chain drive. He is able to accelerate the car to hundreds in 11.1 s, demonstrating a relatively small fuel consumption for an “adult” SUV - 8 liters in the country and 8.9 liters in mixed mode. The main versions of cars intended for the Russian buyer are equipped with sequential adaptive automatic transmission INVECS-II Sports Mode. The only option with five-speed mechanics is offered by the basic Invite.

The independent suspension Mitsubishi Pajero has not undergone significant changes. Also, Russian Pajero are equipped with an advanced Super Select 4WD III transmission, in which its capabilities are supplemented by a function of forced locking of the rear differential. The transmission can be used in four modes designed for different road conditions: 4H, 4HLc, 2H and 4HLLc - four-wheel drive, four-wheel drive with a locked differential, rear-wheel drive and four-wheel drive with a reduction gear. Differential lock in 4HLLc and 4HLc modes is performed using a special button located on the SUV panel. Trip modes can be changed right on the road at speeds up to 100 km / h. At the height and safety of a new car. In addition to the front and side airbags (curtain airbags - optional), the vehicle equipment, starting with the Intense package, includes a set of active safety and cross-country enhancement systems M-ASTC, including the Mitsubishi Active Stability Control (MASC), anti-traction control the MATC system (Mitsubishi Active Traction Control) and the MEBAC (Mitsubishi Engine Brake Assistant Control) assisted engine braking system. The latter can be used on very steep descents. It is activated when the lower row of gears is engaged, the first gear and the brake pedal is not pressed. Once the system determines that the wheel is losing traction, MEBAC begins to control braking, providing a controlled and smooth downward movement.


At the end of August 2014, the Russian Mitsubishi office circulated pricing information for the updated Pajero SUV. From the previous version, the novelty differs in the design of the front part - the car received a modified front grille and a bumper with new fog lamp housings, as well as a different cover for the spare wheel.

All Pajero trim levels are now offered with a new ignition key. The car is also equipped with additional sound insulation, available in all versions, except the base. In the most expensive version, the SUV is equipped with LED running lights and the function of automatically switching between low and high beam.

By default, Pajero is equipped with frontal airbags, air conditioning, stabilization system and ABS, as well as 17-inch wheels and heated front seats. Most complete sets of SUVs have become more expensive by about 10,000 - 30,000 rubles. In Japan, the modified Pajero was introduced in late July. It is expected that Mitsubishi last updated the current generation of the SUV - the next version of the model will be completely different and will receive a hybrid power plant.