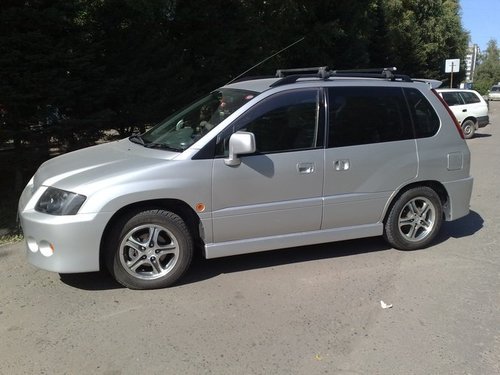 Electrics
Van
The second generation of RVR, having inherited the external dimensions of the first, received its further development. It began to be produced in 1997. The main feature of this model is the accentuated separation into two concepts, each of which is embodied in a separate modification: the GDI RVR, designed for use in urban environments, and the RVR Sports Gear.
Modification GDI RVR is equipped with only a 1.8-liter engine, which is economical in terms of fuel consumption and has a low content of harmful substances in exhaust gases. The cabin can be produced in two trim levels: 4-seater with two rear seats, which can be moved far along the cabin and adjustable in height, and 5-seater, whose seats can be easily removed and which can be rotated around its axis.

Modification Sports Gear has a sporty image due to greater ground clearance, wide wings, a front bumper combined with a grill, and the external location of the spare wheel. Two types of engines are used here: the 2.4-liter GDI series and the 2-liter turbocharged DOHC. On both versions, a 4-speed automatic transmission INVECS-II with sport mode is installed, the gear knob of which is located on the console of the instrument panel. There is also a 5-speed manual gearbox. RVR is available in front-wheel drive or with a FULLTIME 4WD drive. In 1999, the RVR underwent restyling and became more “staffed."