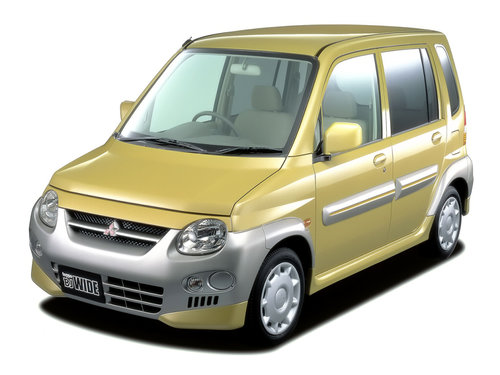 Electrics
Hatchback
The debut of the car falls on January 1999. It was a liter-class model, manufactured on the basis of the small station wagon Toppo BJ. Its distinctive features: an enlarged front and rear bumper, elytra, side fairings and decorative trim on the doors. The body itself was also enlarged, so the car was perceived as a class higher. Naturally, the gauge was also larger than that of the base model, and corresponded to the 5th size group. A 4-cylinder engine with a cylinder displacement of 1.1 liters was installed on the car.
The design of the front of the body made the car easily recognizable, one might even say pretty. At the same time, the Toppo BJ Wide almost did not differ from the base model in interior equipment and other parameters. The body is a five-door with all swing type doors. Standard equipment offered air conditioning, power windows and a central locking system, cassette player, alloy wheels, a rear wiper, and a roof rack were installed on request. The Toppo BJ Wide has plenty of storage space, including a tray under the seat, luggage box, ceiling console, etc.

The engine of the Mitsubishi Toppo BJ Wide could develop power up to 78 hp, which was too much for a car with such a weight (only 11 kg of horsepower versus almost 16 kg of the base model with a 0.7-liter engine). By the way, the exact same 4A31 series engine was installed on the Mitsubishi Pajero Junior model, but the torque there was less. For the car, only one type of transmission was provided - a 4-speed automatic transmission. Drive - to the front wheels or full, Full time 4WD.

Like the Toppo BJ, his fellow BJ Wide has a fairly simple suspension design. It has a front independent suspension (MacPherson strut) and a dependent rear axle on trailing arms. Brakes - disc front and drum rear. The steering is equipped with power steering. The wheelbase of the Toppo BJ Wide is 2340 mm, the track width is 15 mm larger than the base model, and the turning radius is 4.6 m (0.2 m more). The Toppo BJ Wide is 145 mm longer than the Toppo BJ, 80 mm wider and 15 mm higher. The useful volume of the cabin is the same, its dimensions are as follows: length 1715 mm, width and height 1220 and 1425 mm. To increase practicality, the rear passenger seat has separate folding backs (50:50), allowing you to get a large trunk with a flat floor. You can remove the head restraints of the front seats and recline their backs flush with the surface of the rear seat. Conveniently, the Toppo BJ Wide has a full back door that opens to the side, and the opening is wide and high.

The set of security systems Mitsubishi Toppo BJ Wide 1998-2001 is no different from other Japanese cars of this class produced in those years. As a standard, this is a driver's airbag, three-point belts, side impact protection amplifiers in the doors, and a high-mounted brake light. Options included a passenger airbag, anti-lock braking system.

Like the base model, Toppo BJ Wide is unpretentious, maneuverable, economical. And although the car was marked as five-seat in the catalogs, it was a pure formality - inside it is as cramped as the usual Toppo BJ, and three in the back seat are extremely uncomfortable. Moreover, going beyond dimensional “frames” made the model not very popular, and already in March 2001 its release was discontinued.