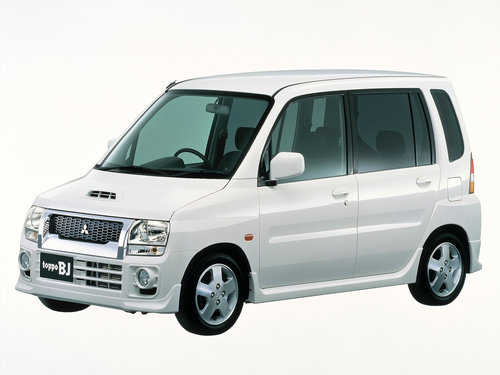 Electrics
Hatchback
In connection with the adoption of new standards for small cars, there was a complete change in such a well-known model as the Minica Toppo. And Toppo BJ is actually the result of this change. At the same time, the designers abandoned the original design of the car, which has a Minica front section and a large cab box (a style typical of the Minica Toppo, which was produced in two generations from 1990 to 1998). The new car received its own front end design and gained 1.7-meter height. The 0.66-liter engine is a 3-cylinder (3G83) or 4-cylinder turbocharged (4A30).
Toppo BJ is equipped with a dashboard similar to Minica, has traditionally low thresholds. Complete sets offered a sufficient variety. The car was produced in a 5-door body passenger or commercial type. The most inexpensive version was considered "U" with a rear bench seat. In a more expensive passenger version, the car’s interior can be called very comfortable thanks to convenient front seats and adjustable rear seats. The R and Z models feature a sporty exterior with aerodynamic details. The special Guppy series has an original front end with round headlights, a different bumper and grille. The engine, drive, transmission are the same as other Mitsubishi cars, but they were originally used on the Minica: SOHC 3-cylinder 12-valve engine with a return of 50 “forces” (62 Nm); 4-cylinder 16-valve SOHC or 20-valve DOHC turbocharged engine with 60 hp (83 Nm) and 64 h.p. (100 Nm). Drive - front or 4WD Easy Select system. The gearbox is 5-speed manual and 4-speed automatic, but the most inexpensive commercial versions of the U type were equipped with mechanics or a 3-speed “automatic”. Depending on the modification, the fuel consumption of Toppo BJ was declared in the range of 4.7-6.6 l / 100 km.

By design, the chassis of the Mitsubishi Toppo BJ looks pretty simple. It has a front independent suspension (MacPherson strut) and a dependent rear axle on trailing arms. Brakes - disc front and drum rear. The steering is equipped with a hydraulic booster, which is standard on all models. Depending on the purpose and configuration, the car received aluminum or steel stamped rims 13 or 14 inches in size. The wheelbase of Toppo BJ is 2340 mm, and the turning radius is 4.4 m. By its dimensions, the car fits into the requirements for key cars: its length is 3395 mm, width 1475 mm. The height is quite decent and is 1680-1695 mm. The manufacturer indicates the dimensions of the passenger compartment: length 1715-1735 mm, width and height 1220 and 1425 mm. To increase practicality, the rear passenger seat has separate folding backrests (50:50). In the commercial version, the back of the back bench is folded up entirely. It’s convenient that Toppo BJ has a real full door at the back, opening to the side, and the aperture is wide and high, plus even in some early trim levels it was possible to separately open the glass - it is very convenient if the back of the place is parked by a car or a wall.

A set of security systems Mitsubishi Toppo BJ 1998-2001 is no different from other Japanese cars of this class, produced in those years. As a standard, this is a driver's airbag, three-point belts, side impact protection amplifiers in the doors, and a high-mounted brake light. Options included a passenger airbag, anti-lock braking system.

Mitsubishi Toppo BJ is one of the most interesting Japanese key cars. Manufacturers usually try to “tailor” these cars in such a way as to make them as spacious as possible, and in the case of Toppo BJ it turned out very well. The car is unpretentious, economical (if you drive in a relaxed manner). But the 3-cylinder engine is weak, the rarity of the machine creates problems with the search for spare parts. In February 2001, Toppo BJ went through a series of changes.