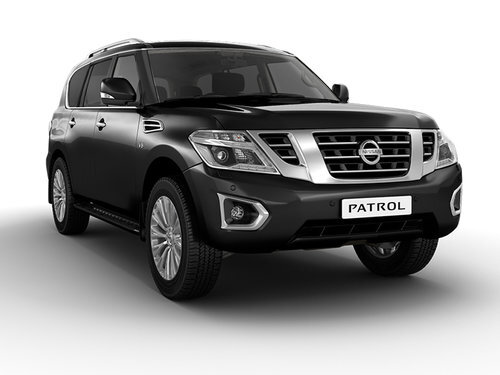 SUV
In 2013, Nissan prepared an updated version of the sixth generation Patrol SUV (Y62), which premiered in November at the Dubai Motor Show (UAE). After restyling, Nissan Patrol received LED headlights and new taillights, as well as an updated radiator grille and front bumper. To the bottom of Patrol doors added chrome moldings. Other updates include modified tail lights, a steering wheel with wood inlays, new leather seats and wheel rims. Under the hood of the car is the previous 405-horsepower V8 engine of 5.6 liters with direct injection. The motor is paired with a seven-band “automatic”.
Restyled Patrol is available in Russia in three trim levels: Base (until 09.2016), High and Top. The standard equipment of the machine in the Base configuration includes: a multifunctional steering wheel with heating, front seats with a ventilation system, heated front and rear seats; Bose premium audio system with 13 speakers, a music server, a hard disk and a DVD player; memory system settings multimedia system, climate control, the position of the mirrors, steering wheel and driver's seat; navigation system with a hard drive and an 8-inch display. A comfortable climate in the cabin is provided by a three-zone climate control system with separate settings for the driver, passengers in the front and rear seats, with an “air curtain” system. In the High configuration, the car is equipped with a power tailgate, roof rails, an entertainment system with a DVD player for second-row passengers. The Top package meets the highest safety requirements - in addition to the High package, this includes a wide range of driver assistance systems, as well as improved trim. The sixth generation Nissan Patrol is one of the most powerful cars in its class. Under the hood is a new VK56VD brand engine - a 5.6-liter petrol V8 rated at 405 hp. and with a torque of 560 Nm. Powerful propulsion system provides excellent dynamics - 6.6 seconds. to accelerate from standstill to 100 km / h. Fuel consumption in the urban cycle, according to the claimed characteristics, is 20.6 l / 100km, in the country - 11 l / 100km. Note that the power plant is paired with a 7-speed automatic transmission.

Simultaneously with the new platform, Patrol received a new independent multi-link suspension of all four wheels, which represents a significant step forward compared to the previous design with continuous axles. In addition, the vehicle’s hydraulic system for limiting body vibrations (HBMC) is installed on the car - it helps the car to stay on the track smoothly when changing lanes and cornering, makes driving in the city comfortable and stabilizes the car when driving on the road. The ALL MODE 4x4 all-wheel drive system offers the driver a choice of one of four operating modes: sand, track, snow and rocks. The standard rear differential lock provides off-road capabilities. The braking system has become more effective - thanks to a new brake booster, 4-piston calipers and discs (front - with a diameter of 358 mm).