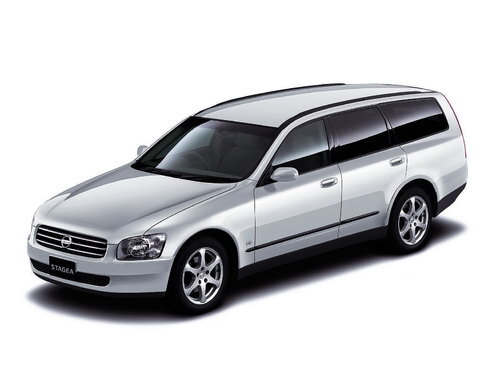 Best-selling parts
Wagon
Stagea debut second generation took place in 2001. In this car, an attempt was made to switch to a new rear-wheel drive platform, which is designed for a 6-cylinder V-engine (the so-called “FM package” layout). Such an innovation increased ride comfort and safety, made the cabin more spacious, and the luggage compartment more practical. All these advantages are present in the car modification Premium Sport Wagon. It can even be called a versatile model of the Skyline V35 series.
Positive side: smooth running and stability. This is made possible thanks to shock absorbers equipped with a device that cuts off low-amplitude vibrations. The rear suspension is of a special design for a station wagon body, multi-link.

All vehicles of this generation are equipped with a 6-cylinder VQ series engine with a V-shaped arrangement of cylinders. Its working volume is 2.5 or 3 liters. You can choose a modification with a 2.5-liter turbo engine, which can develop 280 horsepower. Received further improvement and all-wheel drive system. Now it is an Attesa E-TS system with a "snow" synchronizer. This allows the car to stay more confident on slippery roads.

Powerful speakers are installed in the 300RX's interior as standard, which work in conjunction with the BOSE Music Center. A new modification appeared in the lineup - the AR-X series car, which gravitates to the SUV class. It has increased ground clearance and wing fairings that visually expand the car.