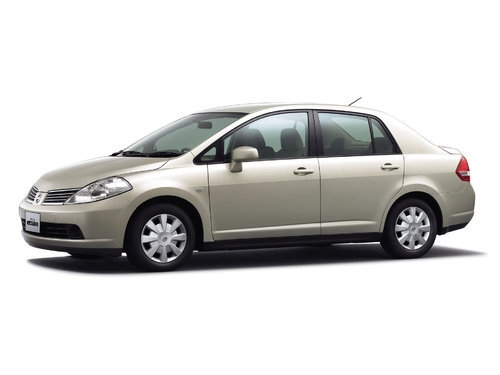 Best-selling parts
Sedan
As you know, in 2000 the Pulsar model series was discontinued, and instead the Nissan Tiida car occupied a niche with a 5th-size body. At first it was offered in the hatchback. But a similar car with a sedan body was soon put into production. This car was named Tiida Latio and went on sale in October of the same year. When creating the model by Nissan, it was decided to try to make a car that would not be inferior in any way to its imported analogues in terms of quality or interior space. Naturally, the appearance of the conceived car should also be peculiar, so the Tiida asset has an original appearance, this is especially striking for the hatchback with its interesting design of the rear. But the main thing is still the interior and the useful volume of the cabin. What happened as a result?
As for the interior design, everything is impressive here. The carefully designed interior surprises with quality. Take, for example, the seats. In terms of comfort, they are in no way inferior to the seats in the Teana cabin - the same voluminous and soft. If you measure the useful length of the passenger compartment, it will be at the level of a high-end Cima car. As for the rear seats, then, perhaps, they make an even greater impression than in the Cima cabin. In general, four trim levels were offered, where in the base 15S there are climate control, wood-like finish, CD player, tinted windows. Options: xenon headlights, front and rear spoilers, navigation with HDD. Leather seats become the standard high-end option in the G trim levels, along with leather steering wheel braid, front fog lights, 15-inch alloy wheels, engine start button, etc.

The power unit abounds with new products. Take, for example, the newly developed HR series engine - a 4-cylinder engine with two camshafts. The engine capacity is 1.5 liters and the power is 109 hp. He works in conjunction with the variator. This combination has significantly reduced fuel consumption. In this version, Tiida is capable of driving up to 20 km on one liter of fuel. Superior aerodynamics (0.29 drag coefficient) provides even greater fuel economy. In addition to the variator, this motor is equipped with an automatic 4-speed gearbox, which is offered on all machines of the lower price group, as well as on modifications equipped with an all-wheel drive system. Since 2005, a new engine has been added - already 1.8 liters and 128 hp. It comes in combination with a CVT or a 6-speed manual gearbox.

Nissan Tiida front suspension - strut The back is a torsion bar. The all-wheel drive system means the modern “e-4WD” system, which is very effective in terms of fuel economy and quick response when connecting the rear axle. The wheelbase is a decent 2600 mm, which provides a more comfortable movement. The minimum turning radius is also quite good - 5.2 meters. If we evaluate the cargo capacity of the new car and the arrangement of the luggage compartment as a whole, then by this criterion the Tiida model can quite successfully compete with the “clean” station wagon Nissan Primera. Yes, and the sedan made such a voluminous trunk, which is not often found in other four-door competitors in the class. No joke, as much as 467 liters.

The Nissan Tiida is a perfect example of a combination of compactness and outstanding comfort indicators inherent in a higher class, including excellent driving performance. All these characteristics of the model became the reason for high interest in it in different markets, production was opened in different countries. As for Russia, and specifically right-hand drive Tiida, they perfectly complement the left-hand drive segment, which, unfortunately, does not offer the technical diversity that is observed in Japan.