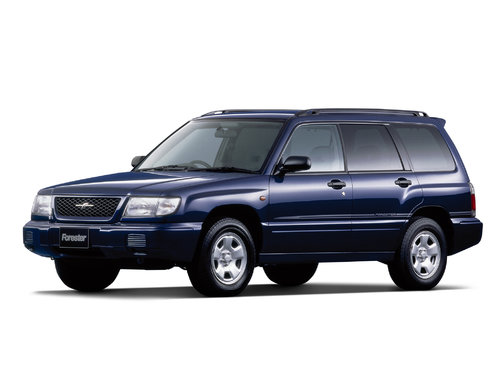 Electrics
SUV
In Japan, serial production of the first generation Subaru Forester began in 1996, and only in 1997 the car was presented at the Detroit Auto Show, in the same year sales of the European version began. The model, one might say, made a splash. It was not difficult to predict its bright future: it turned out that just such a car, successfully combining the best characteristics of an SUV and a compact station wagon, is in great demand on the market. It is no coincidence that in the flow of second-hand cars imported to Russia from Japan, Subaru Forester has become one of the most popular models.
Subaru Forester announced a new concept: high ground clearance, high driving position, excellent cross-country ability, and a jeep-style exterior. Taking into account the family orientation of the new model, everything was done to make the interior as comfortable and roomy as possible. A wide variety of trim levels were envisaged, especially for cars for the domestic market. The differences concerned the type of transmission ("mechanics", "automatic"), rear brakes (disc or drum), wheel size, presence / absence of fog lights, sunroof, electric seat and other options responsible for comfort and safety. The Subaru Forester used a fairly wide range of engines, some of which are presented in different modifications. The base was a four-cylinder EJ20 with a volume of 2 liters and a power of 135 hp. The most powerful is the turbocharged EJ205 with a capacity of 250 hp, with which the Forester turns from a simple "Forester" (which means in translation) into a real wild forest "beast". Interestingly, on October 30, 1996, two samples of the Subaru Forester taken at random from the assembly line took part in the Hulman Trophy rally at the speed range in Indianapolis, where they set a world record, showing an average speed of 180.082 km / h during a 24-hour test. Since 1998, some modifications have been fitted with an EJ254 engine with an AVCS variable valve timing system with a volume of 2.5 liters and a capacity of 167 liters. from.

The design of the front suspension is based on MacPherson struts. The rear suspension is also fully independent, double wishbone type, consisting of two parallel wishbones, a trailing arm and shock absorbers-struts. On cars with "mechanics" - symmetrical permanent four-wheel drive with three differentials. Most cars with automatic transmission used the Active Torque Split AWD system, in which 90% of the torque is transferred to the front wheels and 10% to the rear, but when slipping, the transmission automatically redistributes torque to a 50/50 ratio. On some modifications (automatic transmissions of the TV1 type) - the VTD AWD (Variable Torque Distribution) system, four-wheel drive with an asymmetric center differential (45:55), locked by an electronically controlled hydromechanical clutch.

The approach to safety in the Subaru Forester is serious enough for a car of those years: two airbags, stiffeners in the doors, child seat anchorages, automatic front belt tensioners. After a 2000 restyling, new equipment includes three-point seat belts and head restraints for all five seats, as well as front side airbags. The car performed well enough in the NHTSA crash test, where it received five stars out of seven. In addition to cross-country ability, the advantages of the Subaru Forester include comfort, efficiency and dynamics, which have always been the hallmarks of the Subaru brand. It is only important to note that Subaru engines, with all their advantages, have a number of features in operation and repair, are very sensitive to the quality of the oil, the timing of its replacement and maintenance in general (especially turbocharged ones). However, the advantages outweigh all the disadvantages. And in comparison with any conventional station wagon, Subaru Forester is distinguished by high reliability and durability of the body, its power elements, and with proper operation, cars of the first generation are able to remain in service for many years to come.