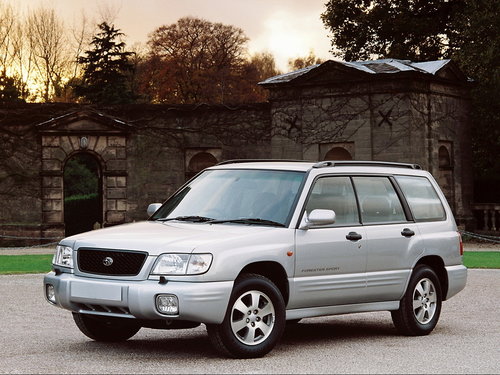 Electrics
SUV
In 2000, the exterior of the Subaru Forester was updated. The car has received numerous changes in the front part of the body, which are hardly noticeable only at first glance: the car has new bumper, headlights and foglights, the hood and radiator grill and fenders have been updated. The rear lights have become smaller in height, but now they "creep" onto the tailgate. The interior has not remained unchanged, where there are also some minor improvements: a modernized dashboard, a radio antenna built into the glass, etc. For the American market, the car continued to be equipped with a 2.5-liter boxer engine with 165 hp.
The Subaru Forester in 200 offers a split into two main versions: the standard L and the sporty S variant. In the first case, the SUV offers an impressive list of standard equipment: fog lights, roof rack, air conditioning, full power accessories (glass, mirrors, locks), front seats with adjustable lumbar support, tilt-adjustable steering wheel, stereo radio. The S model boasts 16-inch alloy tires, keyless entry, a 6-disc CD changer in the dash, and winter amenities include heated front seats, mirrors and windshield washer nozzles. The Premium package includes body-colored bumpers and body liners, aluminum alloy wheels with gold accents, and an electric sunroof. Power filling Subaru Forester remained unchanged. The maximum power of the atmospheric DOHC EJ25D unit, which is equipped with the American version of the Forester, is 165 hp. At the same time, the lower weight of the car compared to the Legacy Outback makes it much more "alive" with the same engine. The very location of the motor and its horizontally opposed design also affects many of the qualities of the car. Such a power unit is quite compact compared to conventional in-line “fours” and allows a smaller engine compartment, which, in turn, lowers the bonnet line, and a low center of gravity improves cornering stability and has a positive effect on handling. The engine works in conjunction with an automatic 4-speed gearbox, but American buyers were also offered an option with a manual 5-speed gearbox, which is characterized by fast and efficient shifting.

The design of the front suspension Subaru Forester is based on MacPherson struts. The rear suspension is also fully independent, double wishbone type, consisting of two parallel wishbones, a trailing arm and shock absorbers-struts. The all-wheel drive system, although not intended for driving on heavy off-road, but coupled with a ground clearance of 190 mm allows you to confidently move on roads of any quality, and on slippery and even snowy surfaces effectively redirects torque to the wheel that provides the best grip ... At the same time, the design itself is compact enough not to affect high fuel consumption, and the engine's tractive effort is sufficient even for climbing mountainous terrain. Depending on the configuration, the Forester received either standard 205 / 70R15 tires or lower profile 215 / 60R16 tires with an improved speed index. The simpler versions have drum brakes at the rear, while the S has disc brakes. The wheelbase is 2525 mm, the interior is quite average, but there is enough headroom in the front and rear, and four people will be quite comfortable. Forester's trunk volume is 410 liters.

After restyling, the Subaru Forester has been reinforced to improve side impact protection. The seats were revised, seat belts (three-point in all seats), along with the front airbags, side airbags were installed, which increased the level of protection for the driver and passenger. The S model includes all disc brakes with ABS as standard, a limited slip rear differential. An important role in the popularity of Forester was played by an excellently tuned suspension and permanent all-wheel drive. The pluses also include comfort, efficiency and dynamics, which have always been the hallmarks of the Subaru brand. It is only important to note that Subaru engines, with all their advantages, have a number of features in operation and repair, are very sensitive to the quality of the oil, the timing of its replacement and maintenance in general.