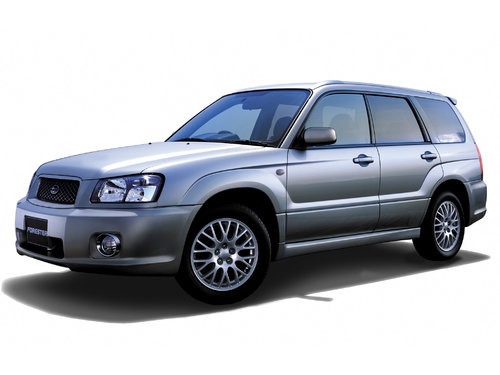 Electrics
SUV
The Japanese company unveiled a new 2003 Forester at the Chicago Auto Show in 2002, which went on sale in the US market in mid-May. The Forester has retained the familiar proportions while retaining the same aesthetic, but the overall look has become noticeably "softer" due to smoother lines. The very expressive front end is still responsible for the vehicle's individuality. At the rear, Forester has triangular lights and larger glass. The dimensions of the body have practically not changed, but the interior has been significantly redesigned, the driver's seating position, visibility, range of adjustments have improved, rear passengers received more space. The cars are still made in Japan. The Forester for the USA now offers a turbocharged version in addition to the 2.5-liter naturally aspirated boxer, which increases power from 165 to 210 hp.
Forester's North American lineup comes standard with X 16-inch wheels, full power accessories, remote control key, air conditioning, 100-watt audio system with CD player. XS models have sporty aluminum wheels, leather steering wheel and gearshift knob, improved interior, six-disc CD changer. There is an optional cold weather package as well as a premium package including custom body liners, power sunroof, and leather upholstery. With the advent of turbocharging, the Forester XT is visibly transformed externally: an air intake on the hood, exclusive wheels with 215/60 R16 tires, body-colored roof rails and door handles, a chrome-plated exhaust pipe. In 2004, the 2.5 XS LL Bean Edition goes on sale with improved exterior and interior trim, as well as luggage space, and includes a self-leveling rear suspension.

The 2002-2005 Forester has two engine options under the hood: naturally aspirated and turbocharged, each paired with a manual or automatic transmission. The powerful 2.5-liter four-cylinder DOHC turbocharged 2.5XT develops a maximum of 210 horsepower (at 5600 rpm) and torque of 319 Nm (already at 3600 rpm), which is 43 percent more than a naturally aspirated engine ... Active Valve Control System (AVCS) helps regulate engine performance to deliver ideal throttle response and fuel efficiency, which in this case is 9.4 liters in the country and 12.4 liters in the city. The naturally aspirated model has a maximum power of 165 hp and a peak torque of 225 Nm (at 4000 rpm). Consumption - 8.7 and 11.2 liters, respectively, the mode (city or highway).

Front and rear, the Subaru Forester has independent rack-mount suspension (front L-arm, rear with parallel rods), coil springs and anti-roll bars. Branded "boxers" Subaru - horizontally opposed engines - allow you to achieve a lower center of gravity, balance the distribution of weight. All Foresters come with four-wheel drive. At the same time, with a five-speed manual transmission, a central differential with a viscous clutch divides the engine power 50/50 between the front and rear wheels, redistributing traction when the front or rear wheels slip, and with an automatic transmission, an active all-wheel drive system with variable torque transmission using electronics is used ... An optional rear limited slip differential was offered for the vehicle. The variable ratio steering provides a reasonably quick response and a small radius of 5 meters. Since the wheelbase of the Forester did not change after the generational change (2525 mm), the manufacturer had to improve the layout of the cabin to make it a little freer. The boot volume in this generation is 388 liters.

Subaru Forester now offers an improved suite of safety systems. The front airbags (including the two-stage front passenger airbag) have been redesigned, side airbags, active front seat head restraints, pretensioners and force limiters on the front belts are installed as standard. A four-channel anti-lock braking system (ABS) is also standard equipment. Electronic Brake Force Distribution (EBD) is standard on the XT. The new design of the bumper and zones of programmed deformation allows for more efficient absorption of impact energy in a collision - the car has successfully passed crash tests. In the new generation, Subaru Forester has become more interesting, while not losing the best qualities of the previous generation. The car has repeatedly won various awards, occupied the highest places in reliability ratings: as the best-selling car, as the "ideal car of the year", etc. The advantages of the model are handling, equipment level, perfect four-wheel drive. Cons - the interior does not match the best representatives of the class, weak iron and paintwork, relatively expensive maintenance.