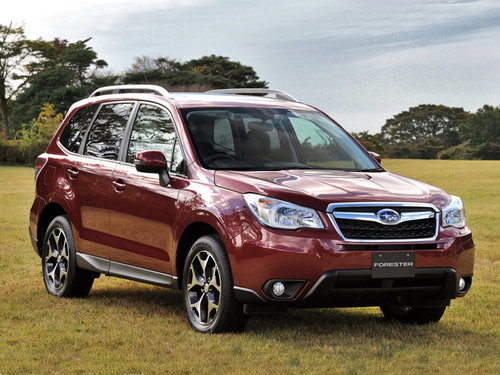 Electrics
SUV
Once again, the Subaru Forester is bigger. Moreover, it is significant in all respects, so if in the first generations some motorists still referred the model to station wagons, then the fourth generation is almost a full-fledged SUV. Four-wheel drive crossover, as before, "symmetrical" (Symmetrical AWD). The innovations include an all-wheel drive control system for stability on different types of surfaces (X-Mode). The car received a reinforced body frame, a new transmission - a Lineartronic variator. In the North American version, the Forester continues to be powered by Subaru's 2.5-liter boxer petrol engine, while the turbocharged version gets a new 2.0-liter unit. The basic configuration of the crossover in the US market under the designation 2.5i offers everything you need: air conditioning, cruise control, a multifunction steering wheel, an audio system with Bluetooth, an on-board computer. In this version, the car has 17-inch steel rims, and light-alloy wheels are available for a surcharge. The 2.5i Premium adds a rear-view camera, improved audio system, and an electric driver's seat. The manufacturer also offers a cold weather package, an electric sunroof. In the 2.5i Limited version, a variator is installed as standard, the interior is lined with leather, there is automatic climate control and an electric tailgate. Even higher levels of Touring include touchscreen navigation, 440W Harman Kardon premium audio, dual-zone climate control and more. Turbocharged versions get 18-inch wheels, rear spoiler and other sporting attributes.

The 2014 Forester has two 4-cylinder boxer engines. The 2.5-liter atmospheric unit inherited from the previous generation, its maximum power is 170 horsepower (235 Nm). It can be coupled to a new 6-speed manual transmission, which replaces the old 5-speed, or the new Lineartronic CVT from the Impreza. The continuously variable transmission replaces the outdated 4-speed "automatic". At the same time, the variator uses adaptive control, is able to adapt to driving conditions and driver preferences, and uses engine braking on descents. The 2.0XT models get a new 2.0-liter turbocharged direct injection engine - 250 hp. from. and 350 Nm. This is more than the previous 2.5XT turbo version (224 hp and 320 Nm). The variator in this case has a SI-Drive drive - the proprietary system offers three modes: intelligent, sports and super sports. Depending on the choice, the driver can use 6 or 8 fixed pseudo gears. The SI-DRIVE control scheme has been changed - instead of a washer on the center console, there are now a couple of buttons on the steering wheel.

Compared to the previous generation, the chassis rigidity of the Forester has increased by 50 percent. Suspensions have been modernized - both independent, with the already known scheme (front struts, double wishbones in the back). The steering is equipped with an electric booster. The 2.0XT models feature a sport-tuned suspension on 18-inch wheels, reinforced ventilated disc brakes at the front and rear. The proprietary all-wheel drive system boasts X-MODE, which is used on the ground, off-road, uneven or slippery roads at speeds up to 40 km / h. The system takes control of the operation of the engine, transmission and stability control system to ensure the most smooth and stable ride. When descending a mountain in this mode, a constant speed is maintained (the available range is 0-20 km / h). Compared to the previous generation, the Forester's wheelbase has increased by 25 mm and is now 2640 mm. The boot volume has grown to 505 liters. For the first time in a Forester, the boot can be opened remotely. Moreover, the developers have provided a function for adjusting the door lift height, so that the automation can be used without problems even in a garage or a parking lot with a low roof.

Safety systems for the Subaru Forester for the USA include front and side airbags, active front seat head restraints, curtain airbags for both rows, driver's knee airbag. The car has a rollover sensor and a fuel cut-off system with a shock sensor. There are numerous electronic assistants: ABS, EBD, Brake Assist, stabilization system. New features include Subaru's EyeSight stereo camera suite, which includes adaptive cruise control, lane departure warning and preventive braking. The "fourth" Forester is rife with new technologies. The car is distinguished by high maneuverability, exquisite appearance, increased efficiency of the new turbo engine. All-wheel drive still makes the car ideal for all road conditions and even for light off-road conditions. However, the Forester has become much more demanding in terms of service. The owners of used cars also call the disadvantages of this generation the low quality of paint, interior, noise insulation.