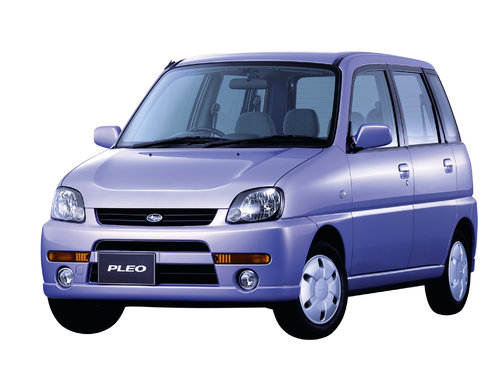 Electrics
Hatchback
In 2002, the Subaru Pleo again received minor exterior changes. These include new front and rear bumpers, stylish taillights complemented by tall reflectors on the C-pillars, and redesigned hubcaps and alloy wheels. Models with reduced roof heights have been continued to meet multi-level parking spaces. More standard features have been added, and the interior has been improved with new contrasting and better upholstery materials or dark gray leather, such as the RS sports series. Most of them come standard with a CD player, electrically folding mirrors, remote control central locking, and driver's seat height adjustment. For Subaru Pleo since October 2002, three engine options are available with 46, 60 and 64 hp.
The next reissue of Subaru Pleo was marked by a general improvement in trim levels. Low-cost models were released with the L Navi Style navigation package, standard 13-inch aluminum wheels and tinted rear windows. The L MD Style version was equipped with a 120-watt ADDZEST speaker with MD / CD player and AM / FM tuner. Special editions with an emphasis on design have not been forgotten. So, the LS Limited and RS Limited series are interesting with headlights and foglights with a blue tint, the RS Limited has 14-inch gold alloy wheels, sports pedals with aluminum pads, and the LS Limited has black 13-inch wheels. The Color Selection models offer special pastel body colors Mint Green Metallic and Airy Blue Metallic, creamy yellow seat upholstery and center dash trim. Since 2004, the Subaru Pleo lineup has been trimmed down to low-cost A and F versions: a commercial van and a more comfortable passenger station wagon. The F type S version was soon added to them, offering the necessary minimum of equipment: CD, power accessories, seat lift, fog lights, roof spoiler. In 2005, the mid-range L trim returned. On its basis, the L Type S sports series was released, which includes a bumper with built-in turn signals and fog lights, a full body kit, a roof spoiler, tinted windows, a tachometer, a sports muffler, a 13-inch "cast", etc. By the end of the model's release, only the commercial configurations of type A remained in the line.

Three engines can be found under the hood of Subaru Pleo released since October 2002. It is a high-octane fuel and the most efficient (64 hp) DOHC unit with an intercooler and "supercharger". A step lower is occupied by a SOHC turbo engine with a mild charge system (60 hp) And for the simplest models, an atmospheric SOHC unit with a capacity of 46 hp is offered. Drive - front or permanent full. Transmission - 5-speed "mechanics" with a lever located on the floor or continuously variable (variator) with a handle on the steering column. With a 64-horsepower engine, a 7-speed manual sport mode is available - gears are changed using buttons on the steering wheel.

What sets the Subaru Pleo apart from many of its classmates is its fully independent suspension, which guarantees improved handling in this compact car. The road behavior of the RS sports model has been improved by a special steering adjustment, increased suspension stiffness (different front stabilizer, 165 / 55R14 tires). The braking system includes ventilated front discs and rear drum brakes (the RS has full disc brakes). Power steering is also standard equipment. It is impossible to imagine a Subaru car without all-wheel drive - 4WD Fulltime system was available for all Pleo modifications. Cross-country ability is facilitated by a short wheelbase of 2315 mm (since October 2001) and a sufficient ground clearance of 150 mm for a kei-car (if necessary, craftsmen raise their cars on their own). The dimensions of the Subaru Pleo interior are not impressive: 1685 x 1220 x 1255 mm (L x W x H). As well as the size of the trunk. But with the rear seats folded down, you can also transport long items - for example, in type A vans (Van), the length of the trunk, if the bench is folded, increases from 630 to 1120 mm.

After two updates, Subaru Pleo as standard (configurations A and F) offers a driver's airbag, belts with pretensioners and load limiters, an anti-lock braking system was installed as an option from the manufacturer. More expensive versions are equipped with two front airbags, optional ABS with electronic brake force distribution. The body meets the current safety standards.

Being a compact car with a 5-door kei car class, Subaru Pleo will offer a rather high comfort and excellent layout of the cabin compared to some competitors, a functional and well-thought-out control panel, and a completely "adult" chassis design. At the same time, this car has strict size restrictions, it is maneuverable, very "nimble" with a powerful turbo engine. Disadvantages: a rarity on the market, difficulties with spare parts, cramped engine compartment, stiff suspension.