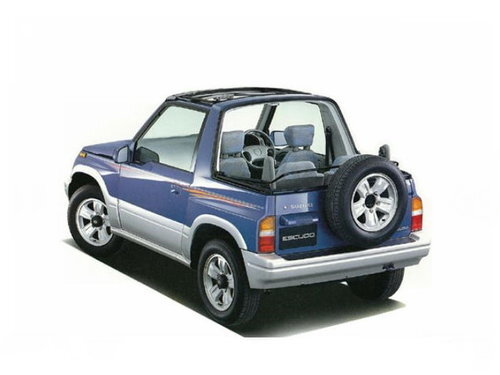 Best-selling parts
SUV
SUV, 3dr
The first generation Suzuki Escudo / Vitara was released in 1988. Compact layout, effective body dimensions, excellent driving characteristics - this is not a complete list of the advantages and distinctive features of this car. The straight lines of the body that underlie the exterior design give the Escudo an original, new look at the time. The so-called staircase frame that underlies the car ensured simplicity of design, the optimal combination of off-road performance and passenger qualities, and at the same time a high degree of reliability in general. In combination with a low price, the car became a hit of the market and with great success began to be sold in foreign markets under many different names, including the established international name Suzuki Vitara.
Initially, the only 3-door version of the Escudo, on which the 1.6-liter inline 4-cylinder SOHC engine was installed, was available in three body types: hardtop, convertible and van (Van). However, a little later, a 5-door Nomade modification appeared, which gained immense popularity. In addition, as part of the 3-door version of the model, a modification of Resin Top began to be produced. Thus, the number of modifications of Escudo gradually increased. As for the most capacious five-door version, it is formally designed for five passengers (but at the same time the back row is frankly cramped). The trunk does not offer too much volume by default (it would be hard to expect otherwise from a car with a length of 3.98 m), but folding rear seats release quite a considerable amount of space. The attributes of this model are an automatic transmission, full power accessories, power mirrors, radio. Escudo was in high demand with a two-tone body color option. The main power unit for the first generation Suzuki Escudo was a 1.6-liter G16A engine, an in-line 4-cylinder SOHC, 100 hp. As an addition to the 1.6-liter modifications, options later appeared that were equipped with other engines. For example, two-liter: in-line of the same power or a V-shaped 6-cylinder in 140 hp, and since 1996, a V-shaped engine with a volume of 2.5 liters and a capacity of 160 liters has been installed on the Escudo. with. - A very serious option for a small essentially SUV. Among other things, a diesel engine was also offered - a two-liter turbodiesel with a capacity of 92 hp, with a torque of 226 Nm.

Suspension Suzuki Escudo is quite unpretentious, simple and reliable. Front - MacPherson struts, rear - continuous bridge. A distinctive feature of the car can be attributed to small overhangs in front and behind, a fairly high clearance - all this only increases the off-road qualities of the car. It is also worth noting that under normal operating conditions, the Escudo moves on the rear wheel drive. In difficult road conditions, this car uses four-wheel drive with a rigidly connected front axle and a lower gear.

The first generation Suzuki Escudo does not have the best training in terms of safety, and the cars of those years do not differ in high ratings for tests on passive safety. However, in its top version, the car can be equipped with two front airbags, anti-lock brakes - all this was offered as an option. Standard for all versions of the car were door stiffeners, three-point seat belts.

The first models of Suzuki Escudo with right-hand drive, which began to enter our country in the 90s, fell, so to speak, on fertile soil, expanding the supply range on the market of light SUVs, where until then the VAZovsky Niva ball had no alternative. Since then, a lot of water has flowed. The class of "urban SUVs" has replenished with dozens of new models. But today, the first generation Suzuki Escudo look good, and cars in good condition are quite common.
No description