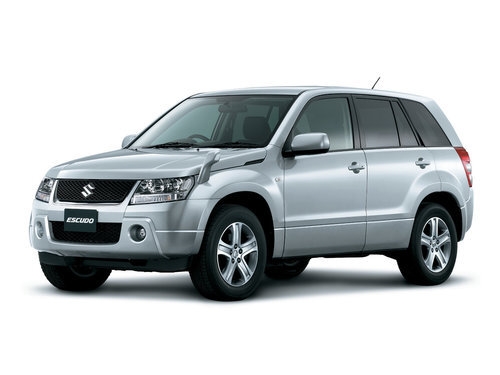 Best-selling parts
SUV
SUV, 3dr
In 2005, the popular multi-purpose SUV Suzuki Escudo once again experienced a complete change in its lineup. Thus, we are already talking about the 3rd generation of these machines, the history of which has been going on since 1988. The width of the body of the car entered the 5th dimensional group. As reported in the company's releases, the new Escudo continues the previous development concept - a car with full off-road performance. In any case, it is safe to say that the car looks like a typical representative of the “cross-country vehicle” class, that is, an off-road passenger car. Constant work on improving its SUV has long become a good tradition for Suzuki, which it has not changed this time. The car has changed very much both externally and internally, and in terms of equipment, especially in the maximum configurations. By the beginning of the release, the new generation of Escudo was represented by three modifications - XE, XG and XS - and only in the five-door version (a year later the three-door Escudo 1.6XC was launched into production in a single complete set). The updated car looks very impressive. Embossed wings and wide tires on 17-inch wheels (or even 18-inch wheels in limited editions) express a sense of stability and strength. The plastic spare wheel cover on the tailgate is painted in body color. The predominant colors of the interior are dark tones, emphasizing the luxury of a sporty interior. At the same time, the decorative parts of the panels are painted in silver with imitation “under the metal”. In a sporty manner, the automatic transmission shift knob is also made. Steering wheel - with leather braid and audio control buttons. A car trunk equipped with a shelf has dimensions increased compared to the previous generation, the backs of the back row are adjustable for tilt. Added to the options of expensive trim levels are details such as remote start, navigation system with HDD, heated seats, mirrors, windshield, garage door opener / shutter system, etc.

The third generation Suzuki Escudo retains the same variety of powertrains. Modifications XE and XG were initially equipped with a two-liter engine rated at 145 hp. and automatic or manual gearbox. Later, a 2.4-liter engine with 166 hp was added. For the modification of XS, a 2.7-liter engine was offered and it only came in combination with an automatic transmission. This V-shaped, 6-cylinder DOHC engine delivers 184 hp. The 3.25-liter V6 engine with a capacity of 224 liters should be recognized as the most exemplary option for power and high-torque. with. and with a torque of 284 Nm, which is distinguished by an outstanding specific power - only 7.63 kg falls on horsepower. Fuel consumption, however, is considerable - almost 11 liters per hundred. As for the only three-door version, a 1.6-liter engine with 106 hp was offered for it.

The third generation Escudo is equipped with a “4 mode full time 4WD” system of a new design. It provides for the operation of the transmission in the "lowered" mode, designed for off-road driving. But the improvements affected not only this quality of the car. There is something new for city driving enthusiasts. In particular, the rear suspension has now become an independent multi-link, which has a positive effect on driving comfort. Thus, the car received a completely independent suspension of all four wheels. The longitudinal arrangement of the engine and the main rear-wheel drive provided an ideal weight distribution between the axles - 50:50. There is progress in terms of security. The 2005 Suzuki Escudo received a new body - a lightweight monocoque with an integrated ladder frame. All this made it possible to achieve higher levels of passive protection without losing off-road capabilities. From the equipment in Escudo there are frontal and side airbags, child seat fastenings, stiffeners in the doors, anti-lock braking system with brake force distribution and auxiliary braking system. In expensive trim levels - traction control system, directional stability control and assistance on the descent and ascent.

This generation of Suzuki Escudo has become largely revolutionary. The car got rid of the image of an inexpensive car, although it maintains competitive prices. Right-hand drive second-hand cars of the third generation may not be as widespread as the previous two generations, but they are of sufficient interest and stable demand, making up a small alternative to their left-hand drive analogue of the Suzuki Grand Vitara. Of the main offer, the most interesting are the 3.2-liter top-end versions equipped with a maximum.
No description