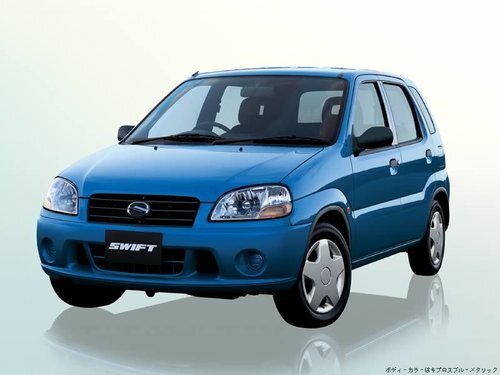 Best-selling parts
Hatchback
Hatchback, 3dr
Swift is the first machine to use the new platform developed by Suzuki and GM specifically for small cars. The release of this model in Japan (the car received the designation HT51S) began in 2000. Swift is a 5-door hatchback with an original appearance, its body is larger than that of Kei. We can not say about the high level of its practicality: the manufacturer noted that the external dimensions of Swift are ideal for Japanese multi-level parking, and the interior is very convenient and comfortable, even people above the average height will feel great in it. This car was equipped only with a 1.3-liter inline 4-cylinder DOHC engine.
The car has everything you need. In the SE-Z configuration, which was offered as an entry-level model “with carefully selected equipment” and sold at a very affordable price, Swift could offer a tachometer, power accessories, radio, air conditioning, a rear wiper and a wide range of additional options. The top version of the SX included standard 14-inch molding, a CD player, a rear spoiler and foglights. Models like SG Aero and the special edition of The 21th Century Memorial Special SG Aero II were distinguished by improved interior equipment and their sporty appearance: body kit, modified bumpers and muffler, alloy wheels of a special design, etc.

Under the hood of the five-door Suzuki Swift hatchback is a 16-valve 1.3-liter inline 4-cylinder DOHC with distributed injection. It does not have high power, but due to the changing phases of the valve lift, it will give its owner a pleasant, calm movement. In addition, it has a high level of quiet operation. Swift was produced with front-wheel or all-wheel drive, equipped with a 5-speed manual or 4-speed automatic gearbox. Fuel consumption in 10/15 mode ranged from 5.4 to 6.1 l / 100 km. The volume of the tank is 41 liters.

The chassis of the Suzuki Swift (HT51S) includes MacPherson struts in front and a dependent rear suspension. Her character is a little harsh, but at the same time there are no special complaints about handling. The car has front ventilated disc brakes and rear drum brakes. Ground clearance is 165-175 mm. The wheelbase is short (2360 mm), but this gives its advantages in the form of compactness. Body length - 3615 mm, width and height are 1600 and 1540-1545 mm. The turning radius is 4.9 meters. Interior dimensions: 1695 x 1345 x 1250 mm (L x W x H). The presence of a rear seat with separate and folding backs makes the car quite practical. Trunk volume - about 300 liters, and if you fold the back row, more than doubles.

Safe enough for its time, Swift was considered due to the presence of both front airbags (for driver and passenger) as standard equipment, seat belts with force limiter and pretensioner (for front seats), four-wheel anti-lock braking system with brake force distribution function, and brake assist system .  Standing out among classmates with an increased attention to safety and equipment, Suzuki Swift offered a full five-seater interior, was well-equipped, “firmly knocked down” and reliable. The only limitation was imposed by an invariant power unit, but it is perfectly tuned, economical and unpretentious. Cons are more associated with some ascetic interior, stiffness of the suspension, possible problems with the search for spare parts.
No description