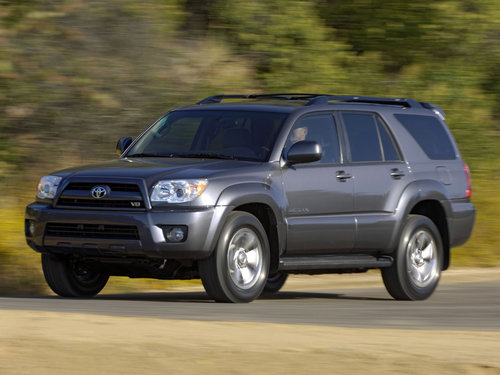 Electrics
SUV
In an updated form, the fourth-generation Toyota 4Runner (N210) appeared as the 2006 model. He received a number of changes in appearance, the composition of the equipment was improved. If we talk about the exterior, the front of the car has changed - it has become more aggressive due to the new bumper and the design of the radiator grille (its design and location of the company logo have changed). There was no reflective light in the rear bumper, and the rear combined lights received LED filling, and new projection-type headlights were installed in front. New windshields and front windows better protect against noise. The Limited version is now distinguished by 18-inch wheels of the original design, the presence of a memory system for seat settings. In 2007, security features were updated, external data was further improved. Engines after restyling remain the same: the base 4.0 V6 and the top 4.7 V8.
After restyling in the Toyota 4Runner 2006 interior, there are few changes - the instrument cluster has been updated, the audio system has the ability to play MP3 files and an auxiliary connector for connecting external sources. Toward the end of the generation, the SUV received two unique special editions - Urban Runner and Trail Edition. The first is based on the V6 Sport Edition and offers alloy wheels R18, a unique rear spoiler, a chrome package (including a chrome muffler nozzle), a leather steering wheel and gear knob, Alcantara inserts in the trim of the seats, a two-story trunk, and a new audio system with support Bluetooth and Tom-Tom removable navigation. An even more interesting version of the 4Runner SUV is the Trail Edition - to most of the Urban Runner options offered, it adds an off-road suspension with Bilstein shock absorbers and an ATRAC system that repels seat upholstery. Among other things, 4Runner 2009 received two power outlets, some changes in the location of individual controls, an entertaining DVD-system for rear passengers. The base engine for the fourth-generation Toyota 4Runner 2006 model year is the all-aluminum 1GR-FE V6 powertrain. With a working volume of 3956 cc he develops a maximum power of 236 hp and torque of 361 Nm. A more powerful 2UZ-FE V8 engine (4664 cc) with a block of ductile iron and an aluminum head produces a maximum of 260 hp, and the torque reaches a maximum value of 415 Nm. Both motors are paired with a 5-speed automatic transmission. All modifications have a VVT-i phase control system and use AI-92 brand gas equally. Fuel consumption (gasoline grade AI-92) in all-wheel drive versions of the V6 is 14.7 l / 100 km. The fuel tank holds 87 liters of gasoline.

The front suspension of Toyota 4Runner is independent double wishbone, the rear is dependent. The X-REAS hydraulic suspension system is used for leveling the body: it connects all shock absorbers with highways and levels rolls and swinging (standard for SE and option for Limited). For the top version, rear air suspension is available. On models with a V6 engine, the MultiMode 4WD shift-on-fly all-wheel drive system is used, which includes five operating modes: H2, H4, H4L, L4, L4L. On models with a V8 engine, a full-time 4WD system is installed, which can switch between H4, H4L, L4, L4L modes, in addition, the panel has a “C. Diff lock ". The dimensions of the body of the Toyota 4Runner N210 are: length - 4801 mm, width - 1875 mm, height - 1819 mm. The ride height is 226 mm (2WD) or 231 mm (4WD). Maximum load capacity - 550-660 kg. The luggage compartment has a volume of 1150 liters. In a top-end configuration, a two-level shelf allows more optimal use of the internal space.

The restyled fourth-generation Toyota 4Runner received two front airbags and optional side airbags (standard since 2008), anti-lock brakes, TRAC (traction control) and VSC (vehicle stability control) systems. The car is also equipped with assistants during the descent from the mountain and at the start on the rise, a reverse camera, an upgraded tire pressure monitoring system. The Trail Edition version received a rear differential lock and an active ATRAC off-road assistance system.

In the fourth generation, Toyota 4Runner went beyond the previous standards - the car received really powerful engines, and with the update it became even more comfortable and safer. For the main tasks, the capabilities of a 4.0-liter engine are enough, unless the 4.7-liter engine has more torque on the bottoms and it is “more traction”, plus there is a difference in all-wheel drive. Before buying, you will need to check the X-REAS system and the rear air suspension (if any), the all-wheel drive control system.