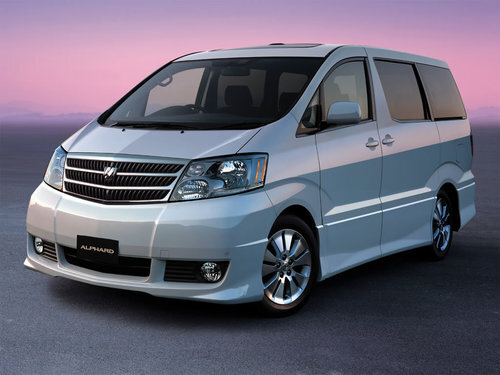 Best-selling parts
Van
Toyota Alphard is an upscale minivan with three rows of seats. He appeared on the Japanese automobile market at about the same time as the second generation Nissan Elgrand, and gained widespread interest. Alphard uses front-wheel drive and a base from the second generation Toyota Estima, and there are all-wheel drive versions. Alphard is the proud owner of the most spacious interior among Japanese cars. If we compare the interior design of the Alphard and Nissan Elgrand, the first compares favorably with the sophisticated luxury of the cabin. With slight design differences, Toyota released Alphardi with the G and V indices - for sale through Toyopet and Netz dealer networks. Gas Alfard is equipped with engines of 2.4 or 3 liters. In 2003, a hybrid version with a 2.4 liter engine appeared.
The Alphard cabin can accommodate 7-8 people; two types of doors - sliding and swinging. On the two side sliding doors of the car installed power windows and door closers. In addition, these doors can be opened and closed using the remote control. For the first time in Japanese car history, the Alphard has a rear-door power drive. A notable feature of the interior are wood panels. Alphard is the record holder for the number of storage compartments, trays, pockets, cup holders. There are individual backlight lamps, sun blinds, a leather interior, two sunroofs, climate control, an audio system with 9 speakers, navigation, an entertainment system for rear passengers with a large display (9-inch screen since 2003) and more. In 2004, a premium version was released with Alcantara upholstery.

The flagship of Toyota minivans at the time of release was equipped with a 2.4-liter in-line four-cylinder or 3-liter V6 engine. The first is a 159-horsepower 2AZ-FE, in combination with a 4-band Super ECT automatic machine, it has an efficiency indicator of 9.4-9.7 km / l depending on the drive. The powerful 3.0-liter 1MZ-FE with a return of 220 “forces” is capable of driving 8.6-8.9 km on one liter of gasoline. Launched in 2003, the Alphard Hybrid is equipped with a THS-C hybrid propulsion system consisting of a 2.4-liter gasoline engine, an electric motor, and a Super CVT variator. In addition, the machine is equipped with an all-wheel drive system E-Four. The efficiency indicator is one of the best in the class. In the urban driving mode, fuel consumption of 5.81 l / 100km was achieved, which is equivalent to a mileage of up to 17.2 km per liter. This is significantly better than the all-wheel drive version with a 2.4-liter engine, and almost 2 times better than the all-wheel drive version with a 3-liter engine.

Toyota Alphard has a front independent suspension with suspension struts such as MacPherson strut and anti-roll bar. The rear suspension is a semi-dependent, torsion beam. Alphard can be equipped with a TEMS suspension including dampers with adjustable stiffness. Disc brakes (front ventilated). Power steering, while the hybrid version uses electric power steering. For gasoline versions 4WD - permanent all-wheel drive with a viscous clutch as an interaxle differential and an optional rear limited-slip differential like Torsen. The all-wheel drive system E-Four in the hybrid version does not have a mechanical link between the axles and includes a rear electric motor that connects the rear axle depending on road conditions. The dimensions of the body of the Toyota Alphard are: length 4840 mm, width 1805 mm, height 1935 mm. The wheelbase is 2900 mm, the minimum turning radius is 5.6-5.8 m. The weight of the car is from 1780 to 2050 kg, depending on version. The minivan has a large saloon (its dimensions are 3085 x 1585 x 1390 mm), a spacious luggage compartment, and a thought-out system for transforming the seats. Being the flagship model, the Toyota Alphard is well prepared for safety. Standard front airbags complement the optional side airbags and curtains for the entire length of the passenger compartment. For active safety, standard ABS and EBD systems, optional traction control and anti-skid systems are responsible. The TEMS suspension actively reduces roll in corners. The rear camera will help in parking, Alphard also equipped with a front-view system with a camera in the grille, eliminating blind spots in front of the car.  Toyota Alphard is a very comfortable minivan with a spacious interior and an abundance of premium options (there are more of them in the 3.0-liter version). Reliable and not too expensive to maintain. Ideal for long trips with the whole family. However, it is worth taking into account the very low ground clearance (even less than that of many sedans). The fuel consumption is decent, while the base engine is also not powerful enough for a heavy car.