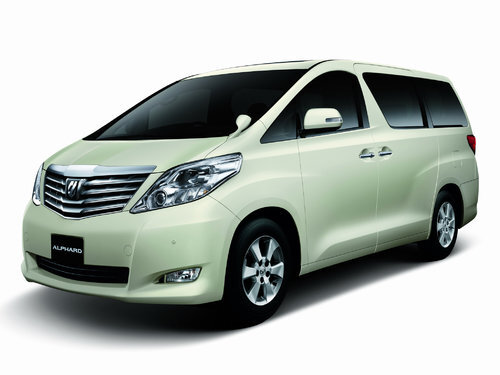 Best-selling parts
Van
In the second generation, this luxury minivan became lower in growth, but due to the use of a lower platform, it not only did not become crowded, but even added in volume. Instead of the former separation of Alphard G and Alphard V, the company now represents a new generation of minivan in the "face" of Toyota Alphard and its "brother" - Toyota Vellfire. New cars demonstrate further evolution in the creation of Toyota's outstanding minivans: elegant, comfortable and modern. Two engines are provided: an economical 2.4-liter (170 hp) combined with a CVT and a powerful 3.5-liter V6 (280 hp) paired with a 6-speed AT. Front-wheel drive or full drive.
The comfort of the spacious Alphard cabin is brought to perfection: the minivan is equipped with very comfortable seats (7 or 8 seats), has excellent sound insulation. The driver's seat - with electrical and memory settings. In the top 7-seater configuration, the separate seats of the second row are also equipped with an electric drive, there are footrests and large head restraints. Alphard is equipped with a system of diffused LED lighting (four degrees of brightness). The standard equipment includes climate control with a humidity sensor, heated seats. The highest sound quality provides an audio system with 18 speakers. Various special versions were offered, for example, models for people with disabilities, as well as equipment with an exclusive design, such as the Prime Selection and Prime Selection II series.

In the second generation, the 2008-2011 Toyota Alphard is equipped with two types of engines: a 3.5-liter VGR 6-cylinder 2GR-FE brand engine with a Dual VVT-i system, paired with a 6-speed automatic transmission, as well as 2 , 4-liter 4-cylinder engine 2AZ-FE VVT-i mated to a CVT gearbox. The maximum power of the first motor is 280 hp, and the maximum torque reaches a value of 344 Nm. The 2AZ-FE engine has a power of 170 hp. with a torque of 224 Nm. Both options allow you to enjoy the control over the behavior of the machine - for motors there are near-sport gearboxes with Shiftmatic sequential mode, which makes it possible to independently control the change of speeds. If we talk about efficiency, the younger modifications have an indicator of 11.4-11.6 kilometers per liter of fuel, and more powerful - 9.1-9.5 km / l.

In the third generation, Toyota Alphard, as before, shares the chassis with the Estima. Independent front suspension with suspension struts such as MacPherson strut and anti-roll bar. The rear suspension is a semi-dependent, torsion beam. Minivan disc brakes (ventilated front). Gear-type steering with electric power steering. In the new generation, the Active Torque Control system is used in the 4WD modifications - in the normal state, the drive is driven to the front wheels, in the AUTO 4WD mode, the system automatically directs torque to the rear wheels if necessary. The dimensions of the body of the Toyota Alphard in the second generation are: length 4840-4855 mm, width 1830-1840 mm, height 1890-1915 mm. The wheelbase has increased by 50 mm - up to 2950 mm, the minimum turning radius is 5.7 m. The weight of the car is from 1940 to 2190 kg, depending on version. The dimensions of the Alphard cabin have become even larger: 3160 x 1585 x 1400 mm. For comparison, in the previous generation it was 3085 x 1585 x 1390 mm. The roomy luggage compartment is combined with a well-thought-out seat transformation system.

Toyota Alphard has excellent safety performance. The standard equipment includes front airbags, side airbags and curtains for the entire length of the passenger compartment, active head restraints, child seat mounts. For active safety, ABS and EBD systems, brake assist brake assist system and dynamic stabilization system are responsible. A variety of “assistants” were installed for an extra charge, including a pre-crash safety system, a radar-type cruise control, and a lane holding system. In the second generation, the Toyota Alphard has become even more luxurious, fully justifying its status as a luxury minivan. The car is still reliable and not too expensive to maintain, although the new engines are more demanding in operation. A significant disadvantage remains low ground clearance. In 2011, the company updated the minivan and, in addition to the gasoline versions, again released the Alphard and Vellfire hybrid modifications for the Japanese market.