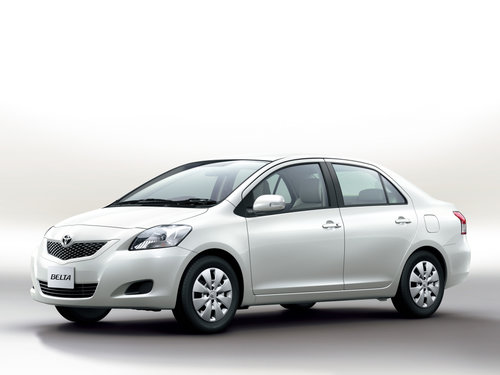 Electrics
Sedan
Exterior changes to the Toyota Belta after restyling in August 2008 include a new design for the grille and 15-inch alloy wheels. As standard, turn signal lamps are now integrated in the side mirrors. The changes in the cabin are quite interesting, among others: the dashboard, interior decoration are updated, the back seat now folds in parts not only in an expensive configuration, but also in the new version 1. 3 X L package. The aggregate part remains unchanged. The basic three-cylinder engine 1.0 liter, front-wheel drive and CVT; 1.3-liter "four" in combination with a CVT (front-wheel drive) or "automatic" (4WD).
Speaking about the interior equipment of Toyota Belta in more detail, it can be noted that after restyling the color scheme of the interior has changed, the armrests of the rear doors have increased in size, and in the luxury configuration G there is now a heated driver's seat. Sports equipment has been canceled, and the basic version remains X. But, as before restyling, the manufacturer also offered simpler versions like X business A and X business B - with simplified trim and upholstery, which is better suited for commercial purposes. A new third modification of the model is now available - the XL Package, essentially the same X, but the interior is equipped as in G. Belta L Package has an optitron “tidy” with better display of information, automatic air conditioning with pollen removal mode, a driver's seat heated. In 2010, additional improvements to the luxury trim levels include new upholstery materials.

With a 1.3-liter DOHC four-cylinder engine, the Toyota Belta sedan is available in front-wheel drive, as well as in a version with permanent all-wheel drive and improved torque - in both cases, the 2SZ-FE engine power will be 87 horsepower, but the 4WD version has 120 Nm traction torque versus 116 for a single-drive. In the first case, the engine is aggregated with a variator, in the second - with a 4-speed automatic transmission. The version with the 1.0-liter engine is only front-wheel drive - with this modification, the three-cylinder unit 1KR-FE develops a maximum of 71 hp. and 94 Nm of torque. The profitability indicator for this version reaches a value of 22.5 kilometers per 1 liter of gasoline (4.4 l / 100 km). In versions of 1.3 liters - from 20 to 16 kilometers per liter (5-6.25 l / 100km). In 2009, by changing the settings of the engine, variator and generator, the fuel efficiency of the front-wheel drive versions was improved - plus another 0.4-0.5 km mileage per liter of fuel. Thus, the fuel efficiency standards of 2010 + 25% were achieved. The sedan's tank volume is quite enough to refuel less often - 42 liters. The chassis of the Toyota Belta has the same design as the Vitz. MacPherson strut front. Rear - semi-independent suspension with a torsion beam. But the sedan has retuned shock absorbers, anti-roll bars. In the basic version, 165 / 70R14 wheels were installed, and in the more expensive ones with a 1.3-liter engine, 185 / 60R15. Cars with 4WD give you the opportunity to take full advantage of this type of transmission on slippery roads and in bad weather. Toyota Belta is equipped with an electric power steering, ventilated disc brakes on the front axle and drum on the rear. The dimensions of the body of the sedan are: length 4300 mm, width 1690 mm, height 1460 mm. It is worth recalling that the Belta, although it was created on the basis of Vitz, but in comparison with its predecessor, the Platz sedan, has much more differences from the hatchback. It has completely different body panels, a significant difference in the wheelbase (2550 mm - 90 mm larger than the current Vitz), the side racks are pushed back, the seat structure is newly developed, their attachment points in the cabin and the angle of the backrests are changed. As a result, the Belta's rear seats are as spacious as the Corolla. Interior dimensions: 1965 x 1390 x 1200 mm. It is 110 mm longer than the Vitz, but also 70 mm lower. Trunk volume 450 liters. In some trim levels, the rear seat is folded in parts (60:40).

Of the security systems, this compact car will offer frontal, side airbags and curtain airbags. The front seats are equipped with headrest protection (WIL), seat belts with pretensioners and load limiters. The standard set of electronic “assistants” responsible for active safety and traffic control includes an anti-lock braking system (ABS), a brake force distribution system (EBD), and an auxiliary braking system (BAS). As an option for picking G, an electronic stability control system was offered.

Like the Vitz hatchback, the Toyota Belta sedan belongs to the compact compact car category. They can hardly be considered as a vehicle for long-distance travel. But as a city car - this is the best option. Belta has a low cost of ownership and maintenance: spare parts are available, possible problems and diseases of engines and suspensions are well studied. Cons - hard plastic in the cabin, poor sound insulation, increased vibration in versions with a three-cylinder engine, low ground clearance.