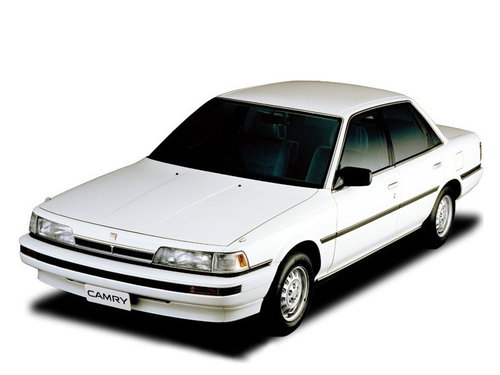 Electrics
Sedan
The second generation Camry sedan received the designation V20. In parallel, the Vista model continues to be released as a "sister" to the domestic market. In the new generation, more attention is paid to aerodynamic performance, so the Toyota Camry sedan differs from its predecessor in rounded body shapes. Dimensions have changed slightly (mainly in length), the same size of the wheelbase is preserved. The engine range includes modernized predecessor engines and new power units with a capacity of 85-140 hp. In addition to front-wheel drive modifications, all-wheel drive has now appeared in the lineup. It is worth mentioning the flagship version of the Camry Prominent with V6 engines, which was awarded a separate place in the lineup. A wagon was also offered for some markets (not Japan).
The new Camry is characterized by smoother shapes not only in the exterior but also in the interior - so that the angular dashboard is a thing of the past, and the new one looks quite elegant even by modern standards. The dimensions of the internal space in comparison with the previous model remained almost the same. But the overall level of comfort has improved, the design of the seats has been finalized in order to make the landing even more convenient. In the new generation, a variety of configurations were offered for the Camry: LT, XT, XT Saloon, Lumiere, ZE, ZT, ZX and GT. The top version of the GT (Gran Turismo) is distinguished by special aluminum wheels, an advanced air conditioning system, the most powerful gasoline engine, electronic instrument cluster, TEMS suspension and other features. In 1988, the model was restyled, in 1989 there were versions of the Lumiere S and Lumiere G, offering a number of special options.

In the second generation, only injection petrol engines were installed on the Camry. In the initial trim levels, it was a 1.8-liter SOHC 85 hp 1S-i engine, which was equipped with a 5-speed manual or 4-speed automatic transmission. The remaining gasoline engines had a DOHC type design. The initial one was a new 1.8-liter 4S-Fi with 105 hp. More powerful 2.0-liter units 3S-FE and 3S-GE produced 120 and 140 “forces”, respectively. The most widespread and popular version of the power model with a 3S-FE engine became optimal in power, with this engine all-wheel drive versions (Full Time 4WD), coupled with “mechanics” or “automatic” (since 1988), were also offered. The buyer could choose a diesel version - such Camry was equipped with a 2.0-liter turbo engine 2C-T with a capacity of 85 liters. with.

The Toyota Camry (V20) suspension is completely independent of the rack-mount type, simple and reliable, while providing high ride quality and a level of comfort. Options GT features a stiff sports suspension, a strut between the front struts, electronically controlled suspension TEMS. The car is equipped with a brake system with ventilated discs on the front wheels, rear brakes, depending on the configuration, are drum or disc. Steering - type “gear-rack” with power steering (except for the initial configuration LT). The dimensions of the body of the Camry sedan (V20): 4530 x 1690 x 1390 mm (L x W x H). The wheelbase is 2600 mm, and the minimum turning radius is 5.3 m. The luggage compartment is quite roomy, and in more expensive trim levels it can be increased by folding the seatbacks (60:40).

The safety of Toyota Camry in the second generation (V20) has become higher. For example, the car received three-point seat belts of the rear seats as a standard, height adjustment of the front belts, and special child seats could be installed. In some models, the 4-ESC dynamic stabilization system (option) first appeared. In the GT configuration, an active TEMS suspension (Toyota Electronically Modulated Suspension) was installed, which served to increase stability, controllability of the car, as well as traffic safety. Despite the venerable age of cars of this generation, one cannot but note the truly legendary reliability of Toyota Camry. The high engine life, the safety factor and corrosion resistance inherent in the design allowed the representatives of this Toyota series of the 80s to survive many competitors of other brands. Of course, today, of those machines that are still in operation, it is more difficult to find a copy in good condition, but the prices are very affordable, and, for example, the Camry GT can be an excellent object for restoration.