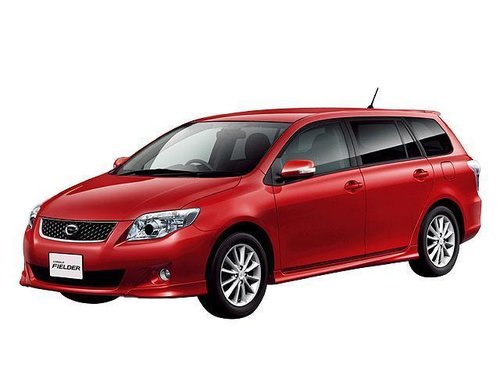 Electrics
Wagon
The second generation Corolla Fielder was launched simultaneously with the tenth generation of the Corolla Axio sedan (140th body). In terms of its dimensions and technical data, Fielder is perfect for those owners who need a truly versatile vehicle - not only for urban use, but also for outings in the city or regular trips to the household economy. Thanks to the short front overhang and the long cab, the interior of this model, as well as the luggage compartment, are incredibly spacious. In this generation, Fielder is the first in the world to implement a system that allows folding the rear seats with a single press of a button located in the trunk.
The most inexpensive basic equipment “1.5 X” offers a simple salon, air conditioning with manual control, a steering column with adjustable in two planes, as an option, a sunroof, tinted windows, front and rear fog lights are provided. In more expensive trim levels: separate climate control, wood inserts, multimedia system with LCD display, HDD, navigation, head optics with xenon headlights, heated mirrors. Over the years, the car has undergone a series of improvements. In 2008, there was a redesign of the grille, bumper, as well as front and rear lights. The “Aerotourer” package, which has the original front and side body kits, has also undergone minor modifications. In 2009, the settings of the engine, transmission, electric generator of the front-wheel drive model, equipped with an engine volume of 1.5 liters, were revised, as a result - reduced fuel consumption. In mixed mode, the car consumes 5.4 liters of gasoline per 100 km (previously - 5.6 liters). In addition, the “X G Edition” modification received additional turn signal repeaters built into the rear-view mirrors, and the “X Aerotourer” modification received an automatic air conditioner with the function of removing pollen from flowering plants. In the list of powertrains, the 1.5-liter 1NZ-FE engine rated at 110 hp is listed as the base. The next one is a 1.8 liter 2ZR-FE equipped with the Dual VVT-i system, which, depending on the operating conditions of the engine, controls the opening time of both the intake and exhaust valves, which ensures a relatively high power per unit volume, depending on modification of the car, it is 125-136 liters. with. at 6000 rpm, the torque is 157-175 Nm at 5200 rpm. Since 2010, this motor has been replaced by an even more modern version - 2ZR-FAE, which is equipped with a new generation Valvematic gas distribution mechanism, which reduces the environmental impact. Depending on the vehicle and the settings of the engine control unit (ECU), the power of this motor is 133-144 liters. with. at 6600 rpm, torque 164-176 Nm at 4400 rpm.

Suspension Corolla Fielder remained virtually unchanged. Ahead - independent, spring, with racks McPherson. Behind - semi-independent, spring on a torsion beam. Still on all-wheel drive modifications (V-Flex 4WD), another type of design is used at the rear - a double-lever suspension. Transmission - mechanical 5-speed (on versions with a 1.5-liter engine) or CVT Super CVT-i. In cars with a 1.8-liter engine, the variator is equipped with a Sports Sequential Shift system that allows the driver to enjoy manual gear shifting.

Outwardly, the relatively high Fielder looks like a classic station wagon and a minivan at the same time - such a kind of hybrid. Roomy, frisky, functional, and even offering all sorts of amenities that significantly increase the consumer qualities of the model. In addition, this generation is one of the most attractive cars in terms of price, quality and technical condition.